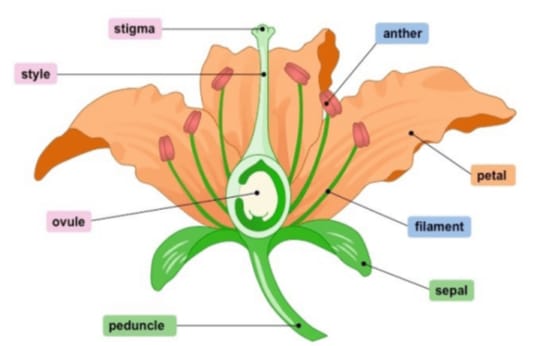 MCQ ON OVULE class 12 for NEET

Introduction:-
A carpel or pistil has a stigma or receptive region for pollen grains, a stalk or style and basal swollen region or ovary. Ovary contains one to several ovules.

Ovule is integumented indehiscent megasporangium of phanerogams which on fertilization ripens into a seed. It is oval and whitish.

The Ovule is attached to placenta by means of a stalk called funiculus .The point of attachment of funiculus to the ovule is known as hilum.

A raphe is formed by the fusion of funiculus with the body of Ovule.The actual megasporangium equivalent is a parenchymatous tissue called nucellus.It may be thin .

Nucellus is covered by one integument or two integuments.The inner region of integuments may provide nourishment to developing embryo sac when it is called a endothelium.

Outer side of each integument as well as nucellus possess cuticle.

MCQ ON OVULE class 12 for NEET

1. Ovule develops as a merismatic primordium over

3. The body of Ovule live straight and upright over the funicle .Hilum , chalaza and micropyle occur on the same line with hilum and chalaza nearby .

4. The body of Ovule is inverted and gets fused with funiculus along its whole length on one side.

5. The body is curved but the embryo sac is straight .Hilum ,chalaza and micropyle come nearby.

6. In angiosperms during development of embryo , the suspensor cell develop from

7.The funicle is large and coiled around the ovule.

8. Both body of Ovule and embryo sac are curved.

9. Which is the only diploid structure in the embryo sac?

11. The chalazal cells are known as

(a) synegids
(b) micropyle
(c) antipodal cells
(d) all the above

12. The most common forms of Ovule in angiosperms are

13. In opuntia forms of Ovules found

16. A non – nutritive structure is