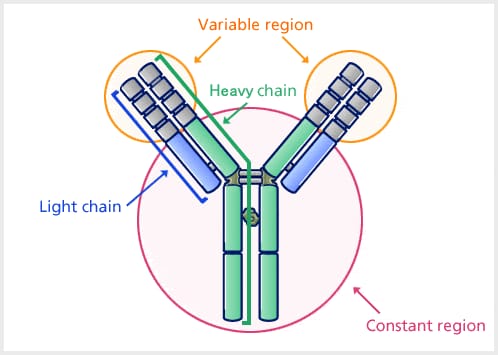 MCQ ON ANTIBODY class 12 for NEET

Introduction:
Everyday we are exposed to large number of infectious agents however only a few these exposes result in disease why this is due to the fact that body is able to defend itself from most of the foreign agents this over all ability of the host to fight the disease causing organisms conferred by the immune system is called immunity. Each of two types innate immunity and acquired immunity. Innate immunity is non specific type of defence that is present at the time of birth .This is a accomplish ed by providing different types of barriers entry of foreign agents in our body. innate immunity consists of four types of barriers, these are physical barriers physiological barriers cellular barriers and cytokin barriers. Acquired immunity on the other hand is pathogen specific. Characterised by memory.
The B- lmphocytes produce in army of protein response to pathogens in our blood to fight with them. This proteins are called antibodies. The T- cells themselves do not secret interbodies but help be B – cells to produce them. Antibody molecule has four peptide chains. To small call light chains and to longer called heavy chains. The antibody that found in blood response is also called humoral immune response. This is 100 2 types of our acquired immune response antibody mediated. The second type is called cell mediated immune response or cell mediated immunity.

MCQ ON ANTIBODY class 12 for NEET

1. The glycoproteins which are of enumerable types it ,specific to specific antigen called

3. It’s antibody consists of how many types of polypeptides

4. The shape of antibodies is

5. The antigen binding fragments of arms of antibodies is called

6. Which antibody is called secretary immunoglobin

8. The immunoglobin or antibody effective against toxin and allergens is

9. Antibodies which is present in mucus membrane ,skin and lungs .

10. Antibody which is attached to mast cells and basophils for releasing histamine and other substances that mediate hyper sensitive response to allergence

11. Antibody which is present 75% of total immunoglobin present in all body parts

12. Largest antibody with 10 binding sites is

13. The antibody which is first to reach site of infection and activate classical pathway of complement system

14. Which is produced in primary immune response

16. Antibodies are synthesized by

17. Which of the following is released initially as a inflammatory response

18. Each immunoglobin has two heavy chains and two a light chains the antigen binding site is found in

Ans. (d) variable region of both heavy and light chain

19. Which immunoglobin is the largest in size ?

20. Lysis of foreign cells is mediated through