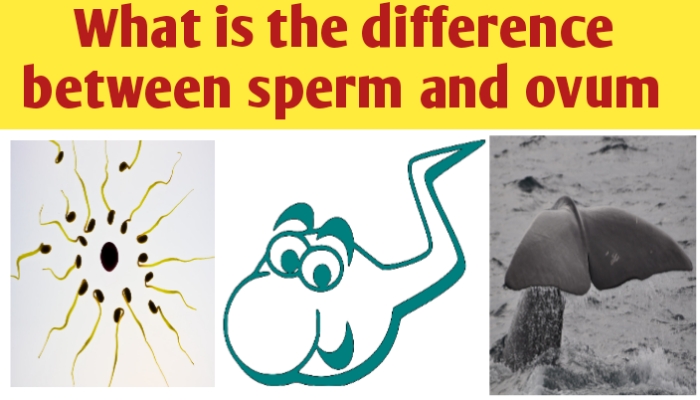 What is difference between sperm and ovum

What is definition of sperm with examples?

Definition of sperm:- sperm is the male gamete which forms in seminiferous tubule of the testes that is lined by germinal epithelium, sertoli cell nourish the sperm. For example sperm of human male gamete.

What is definition of ovum with examples?

Definition of ovum :- Ovum is a female gamete which is formed through oogenesis, egg formation begins birth, but is completed only after fertilization. For example ovum of female gamete of human beings.

How do you compare between sperm and ovum ? when you compare between sperm and ovum is that, 1) sperms are produced in the testes while ova are produced in the ovaries, 2) sperm formation starts at puberty (13 to 16 years of age) and takes about 2 months while ova formation begins before birth and is completed after fertilization, taking 13 to 50 years and 3) sperm production continues throughout life from puberty onward while ova production stops at an age of 45 to 50 years.

How do you distinguish sperm from ovum?, you can distinguish sperm from ovum are in the following points:- 1. Mature spermatozoa are released from the testes while immature ova are released from the ovaries, 2) Four spermatozoa are formed per spermatogonium while only one ovum is formed from one oogonium, and 3) sperm is externally differentiated into 5 regions: head, neck, middle piece, principle piece and end piece while ovum is not externally differentiated into regions.

How does sperm differ from ovum?, sperm differ from ovum in the following points:- 1) sperm nucleus is very compact, has condensed DNA, lacks RNA and nucleolus while ovum nucleus is large and called germinal vesicle, has DNA, RNAs and nucleolus, 2) golgi apparatus of sperm is reduced to a minute acrosome while Golgi apparatus of ovum is normal, and 3) mitochondria form a spiral in the middle piece of sperm while mitochondria are scattered in the ooplasm.

What is the difference between sperm and ovum

This question is very important for class 8th,9th,10th,11th and 12th students who are preparing for competitive and annual board examination.

Regarding this,“what is the difference between sperm and ovum? the main difference between sperm and ovum are the following:- 1) spermatozoa survive for 1-3 days in the female’s genital tracts while ovum survives in the oviduct for 3 days, 2) Spermatozoa are nourished by sertoli cells during development while ovum gets nourishment from follicle cells by sending into them microvilli from oolemma, and 3) sperm has no protective coats while ovum is enclosed by 2 protective coats :internal zona pellucida and external corona radiata.

2) sperm formation starts at puberty (13 to 16 years of age) and takes about 2 months while ova formation begins before birth and is completed after fertilization, taking 13 to 15 years.

3) A single ejaculate of 3 ml. may contain 200 to 400 million spermatozoa while Only 416 ova out over 2 millions present in the ovaries are ovulated in woman’s life time.

4) Sperm has scanty cytoplasm while ovum has a large amount of cytoplasm called ooplasm.

5) Mitochondria of sperm form a spiral in the middle piece while mitochondria are scattered in the ooplasm.

Important features and characteristics of sperm

2. Head of sperm is flat and oval in human sperm.

3. Head of sperm is composed of a large posterior nucleus and a small anterior acrosome.

4. Neck is very short and contains two centrioles lying one behind and at a right angles to the other.

5. Middle piece is cylindrical in the human sperm, it contains many Mitochondria tightly coiled round the axial filaments

6. Tail is very long,slender and tapering ,and is formed of cytoplasm.

Important features and characteristics of ovum

1. Ovum is a rounded ,nonmotile cell.

2. Ovum is almost free of yolk and is said to be alecithal.

3. There are no centrioles in the ovum.

5. Ovum side which extrudes polar bodies is called animal pole, the opposite side is termed vegetal pole.

Sperm and ovum both fertilized to form a diploid zygote to maintain the chromosomes number from generation to generation.