As you know that a nucleic acid is a macromolecule. it is chains of monomeric nucleotides, nucleotides are the information molecules of the cell, it is consists of three phosphoric acid, a sugar molecules, a molecules of nitrogenous organic base, all linked together by covalent bond. 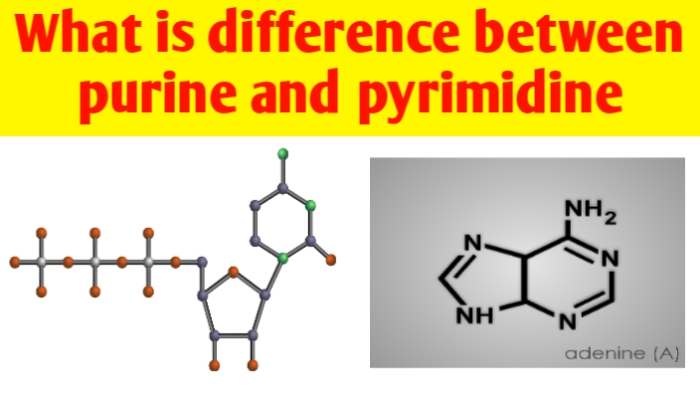 What is difference between purines and pyrimidines

The organic base of a nucleotides is either a pyramidine or a purienes. It takes part in synthesise of DNA and RNA, therefore they are building blocks of genetic material.

Definition and examples of purines

Definition of purines:- It is a heterocyclic aromatic organic compounds with a chemical formula of C5H4N4, it is consists of two rings pyrimidine and imidazole, it includes two of the bases in DNA and RNA, it is water soluble, purines are found in high concentration in meat and meat products, plant based diets are low in purines, the purines nucleotides bases are guanine (G) and adenine(A). Examples of high purines sources are liver, sardines, beer, spirulina etc.

Definition and examples of pyramidines

Definition of pyramidines:- It is an aromatic heterocyclic organic compounds, its chemical formula is C4H4N2, it is consists of three types of nitrogenous bases cytosine(C), thymine(T) and uracil (U). It includes three of the bases in DNA and RNA. It is found in many synthetic compounds such as barbiturates and the HIV drug, zidovudine. Examples of pyrimidines sources are uric acid.

YOU CAN ALSO SEE THIS VIDEO

What is difference between purines and pyrimidines

This question is very important for class 8th, 9th, 10th and 12th students those preparing for competitive and annual board examination.

Regarding this, “what is difference between purines and pyramidines”, purines molecules is larger and has two rings, at 6- member ring joined to a 5- member ring at 4′ and 5′ positions and carries nitrogen at 7′ and 9′ positions also besides at 1′ and 3′ positions, adenine(A) and guanine (G) are two important purines and it is a 9 membered molecule whereas pyramidine molecules is smaller and has one 6 member ring, with nitrogen at 1′ and 3′ positions, thymine(T), cytosine (C) and uracil(U) are three important nitrogenous bases of pyrimidines.

Compare / difference/ between purines and pyramidines are as follows:-

1. Purines are heterocyclic aromatic organic compounds, consisting of a pyrimidines ring fused to a imidazole ring.

2. It contains two carbons nitrogen rings and for nitrogen atoms.

5. Purines help in the production of RNA and DNA protein and starch the regulation of enzymes and cell signalling.

6. There are two important nitrogenous bases in purines :- Adenine(A) and guanine (G).

9. Its molecules consists of 2 rings joined at 4′ and 5′ positions.

13. Purines are synthesized as nucleosides, which are attached to ribose sugars,both de novo and salvage pathways are involved in the biosynthesis of purines.

1. pyrimidine are heterocyclic aromatic organic compounds, similar to benzene,it is isomeric with two others forms of diazine.

2. its contain a single carbon nitrogen ring and 2 nitrogen atoms at 1, 3 position

4. Pyrimidines are synthesized by Biginelli reaction.

5. its function in formation of nucleic acid and in cell metabolism, activation of sugar for polysaccharide and phospholipid synthesis.

6. There are there important nitrogenous bases in pyrimidines :- thymine(T), cytosine (C) , and uracil (U).

9. its molecules is a single ring.

10. pyramidines is a 6- membered molecule.

13. pyrimidines are synthesized as nucleosides ,using both de novo and salvage pathways inside the cell, UMP uridine monophosphate is the precursor producing in the de novo pathways, which is involved in the synthesis of uracil, cytosine and thymine.

Purines and pyramidines are the two repeating building blocks in nucleic acids involves in the storage of genetic information in the cell required for the development, functioning and reproduction of organisms takes place.