You are familiar with two words host and parasite, parasitism is an association of two organisms of different sizes and species in which the smaller one is benefited and larger one is harm the organism which is benefited is called parasite or the organism that suffers is termed as host, the parasite gets nourishment and shelter also from the host, the host can live without parasite but parasite cannot survive without the host, for example entamoeba histolytica is a protozoan parasite lives on the host human beings intestine. 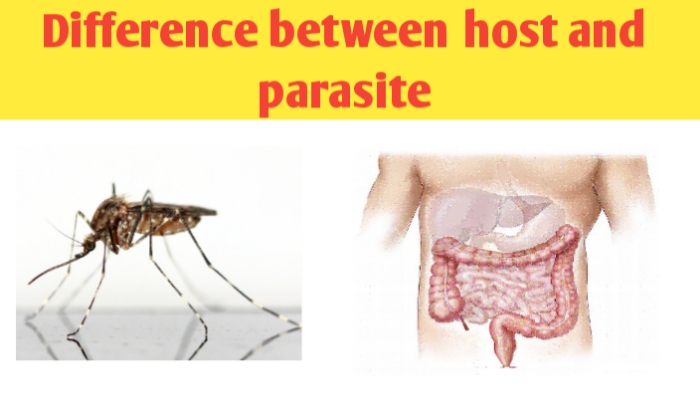 What is the difference between host and parasite

What is the host and parasite?

In biology, a term host is define as larger living organism which provide shelter and food for growth and development of parasite in it, fo example taenia solium is parasite live and survive in host of human small intestine whereas parasite is comparatively smaller living organism that reside in host body for obtaining food and nutrition and shelter.

What is the difference between host and parasite

This question is very important for class 12 students who are preparing for CBSE board/ state board and other competitive medical examinations,neet
exam inations.

Key differences between host and parasite is that host can live without parasite but parasite cannot live without host. Host is comparatively larger and nonharmful organisms that provides food and shelter for growth of parasite, for example human beings is host of parasite taenia solium whereas parasite is comparatively smaller organism may live in or on the body of their hosts and absorbing food and water and for shelter.

Parasite animals may live in the host for the whole of their life or for only a short time, parasites are two types endoparasites and ectoparasites, parasites come from bacteria, fungi, protists, plants and animals. For example ascaris is a roundworm of human intestine, it causes ascariasis, where ascaris is parasite and human beings is host.

List three differences/ how do you compare/ host versus parasite/ distinguish/ differentiate between host and parasite/ host differ from parasites for the following ways:-

2. Host either get not benefited and it may harmed while parasite always benefits.

3. Host is larger in size while parasite is smaller in size.

4. Host has a higher organisation and while parasite less organised than the host.

Conclusions:- host parasite relationship is very complex, the host parasite interaction special case of coaevolution. The parasite benefits from the host whereas parasites have negative effect on the survival and physical condition of the host.