MCQ on ETHYLENE class 12 Biology with answers were prepared based on the latest pattern. We have provided class 12 Biology MCQs question with Answers to help students understand the concept very well. 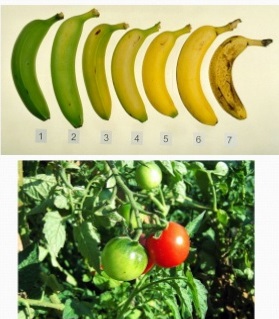 MCQ ON ETHYLENE class 12 for NEET

INTRODUCTION:
Ethylene is a volatile gas present in the atmosphere as a component of smoke and other industrial gases. The consideration of ethylene is a plant growth hormone elters the tropic responses of roots.

It is synthesized in a ripening fruits flowers leaves and even roots and its as a natural plant growth hormone.

Inhibitory effect on growth:-
Ethylene preference elongation of stem and root in longitudinal direction and it in his growth in length is associated with a radial enlargement of the tissues.

Tropic responses:-
Ethylene is responsible for positive geotropic bending of roots. This response is caused through the differential formation of ethylene on geotropically lower side of the roots.

Fruit growth and ripening:-
The growth of fruit is stimulated by ethylene in some plants. The most remarkable effect of ethylene which drew attention of most horticulture is stimulation of fruit ripening.

Flowering:-
Flowering in pineapple mango and various other plants can be induced by application of ethylene.

Dormancy:-ethylene is responsible for breaking the dormancy of buds and seeds.

Sex expression:-ethylene appears to play a major role in determining the sex of monoecious flower . It is associated with promotion of femaleness.

1. It is a simple gaseous phytogrowth hormone

2. It is synthesized in large amounts by tissues undergoing senescence and ripening fruits

3. Influences of ethylene on plants are

4. Which is not function of ethylene

5. Ethylene is highly effective in fruit ripening because

Ans.(a) rise in the rate of respiration

6. Which is not function of ethylene

8. The hormone which is to initiate flowering and for synchronising fruit set in pineapples

9. The most widely used compound is source of ethylene is

10. It hastens fruit ripening in tomatoes and apples in accelerate abscission flowers and fruits.

11. It promotes female flowers in cucumber there by increasing the yield

12. The plant hormone APS to play a major role in determining the sex of monoecious flowers

13. The plant hormone inhibits elongation of stem and roots in longitudinal direction.

14. Flowering in pineapples mango and various other plant can be induced by application of

15. It responsible for breaking the dormancy of buds and seeds