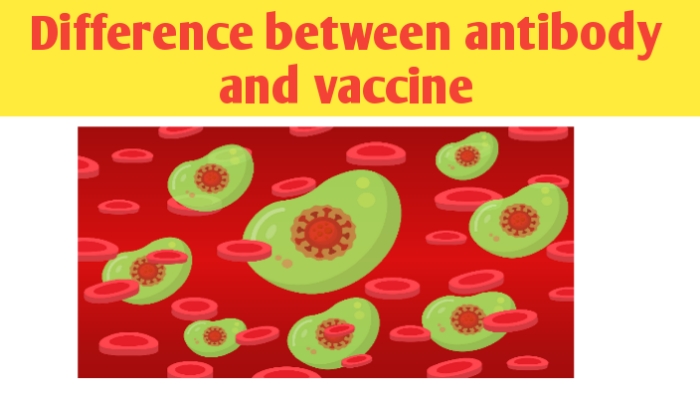 Everybody familiar with the term antibody and vaccine both have similar function that’s provide immunity to your body and fight against infection and prevent us from harmful impact of pathogens like virus and bacteria but these two have differences in their source and nature.

Antibody synthesise by it’s self in our body response to any antigen and it is immunoblotting protein in nature where as vaccine is taken from out side source generally it is modified, inactive part of bacteria and virus with some chemicals.

What is antibody and vaccine?

Antibody is a large protein constitutes Y global produced by plasma cells, it is used by the immune system to identify and neutralize pathogens such as bacteria and virus it is also called immunoglobulin it recognise a unique molecule of the harmful agent cal antigen via the variable region.

Vaccine is the biological program that provides active acquired immunity to a particle infections disease, a vaccine contains an agent that resembles disease causing microorganisms and it’s often made from weekend or kill forms of microbes it’s toxin.

This agent stimulate the body’s immune system to recognise the agent as threat, destroy it to further recognise and destroy any of the microorganism associated with the agent that it may encounter in the future vaccine can be effect most effective methods against infectious disease.

What is the  antibody?

Antibodies is a protective protein produced by immune system in response to the presence of foreign substances called antigen like bacteria and viruses to kill them or remove them from the body.

What is meaning of antibodies?

Antibody means is a protein produce in the blood that fights disease by attacking and killing the harmful bacteria and fungus virus another’s microorganims also.

What are the functions of antibodies?

Functions of antibodies are the following:-
1. Antibody helps in the neutralization and blow the parts of surface of bacterial cell and make it ineffective

Vaccine is a mild form of disease that is put injected into a person or in animals blood using a needle in order to protect the body against the disease.

A substance that is introduced into the body to prevent infection or certain pathogen, it can be used in the bacteria virus and parasitic infections.

What is meaning of Vaccine?

meaning of vaccine is any preparation in intendent to produce immunity to a disease by stimulating the production of antibodies vaccine include for example suspension of killed or attenuated microorganism or products or derivatives of microorganism , this is most common method of administrative vaccine is by injection but some are given by mouth or nasal spray.

What are function of vaccine?

1. The primary function of vaccination is to provide protective immunity by inducing a memory response to an infectious microorganism is a non toxic antigen preparation it is important to produce

2. immunity to the appropriate kind antibody or silver immunity.

4. the ultimate function of any immunization programme is eradication of a disease.

5. Antibody produced result of immunization are effective primary against extracellular organism and their products toxin.

Important features and characteristics of vaccine.

Important features and characteristic of Vaccine are the following:
1. Vaccines are sensitive to heat and freezing
2. Vaccine must be kept at correct temperature from the time they are manufactured until they are used.
3. The system each for keeping and distributing axles in good condition is called cold chain.
4. Vaccines stimulate the body’s own immune system to protect the person against subsequent infection of disease
5. Cell mediated immune system induced by vaccination is important particularly in preventing intracellular bacterial and viral infections and fungal infection.

What are the precautions during vaccine administration?

Precautions during and following vaccine administration:
1. Happy patients seat online during the injection.
2. Observe patients for 15-20 minutes after vaccination.
3. Be prepared for emergency care of person who experience in anaphylactic reaction.
4. If syncope develops observe patients until symptoms resolve never live patients alone.
5. Epinephrine and equipment for maintaining an airway should be available for immediate use.

What are the types of vaccine?

What is the difference between antibody and vaccine?

Key difference between antibody and vaccine in are following points:- antibody is immunoglobulin protein synthesized in our body from beta lymphocytes, secreted in response to antigen, identify the pathogens and inhibit or kill the microbes like bacteria and virus and it makes third line of Defence whereas vaccine is the biological program that provides active acquired immunity to a particle infections disease, contain agent that resembles disease causing microorganisms and it’s often made from weekend or kill forms of microbes it’s toxin.

How does antibody differ from vaccine?

2. In antibody can immediate retain existing infection where age of vaccine will train the immune system battle future infection.

4. Antibody is having y shape proteins produced by B lymphocyte cells, which help in the counter the antigen in the body while people with weakened immune system and pregnant women should consult your doctor before having vaccination.

List of three differences / how do you compare /antibody versus Vaccine/distinguish/ differentiate/ antibody differ from vaccine are the following:-
1. Antibodies are protein produced by b lymphocytes sale to help stop foreign substances in the region from the harming the body while a vaccine is a biological preparation that provides active acquired immunity to a particle infectious disease.

2. Antibodies are naturally produced antibodies providing immune system in body, Royal vaccine type typically contains in agent that resembles a disease causing microorganisms and it often made from weekend or kill forms of microbes the agent stimulate the body’s immune system to recognise agent is it threat, destroy it.

3. antibody bind with antigen found on the pathogen and present infection killing the antigen while vaccination is most effective method of preventing infections disease due to vaccination is largely responsible for world wide eradication of smallpox polio measles and tetanus disease.

Conclusions:-antibodies soldier of the body which provide immunity to the body immunity and sustain the body for longer time while vaccination also stimulate your immune system to respond antigen and kill antigens and provide defence mechanism against pathogens.