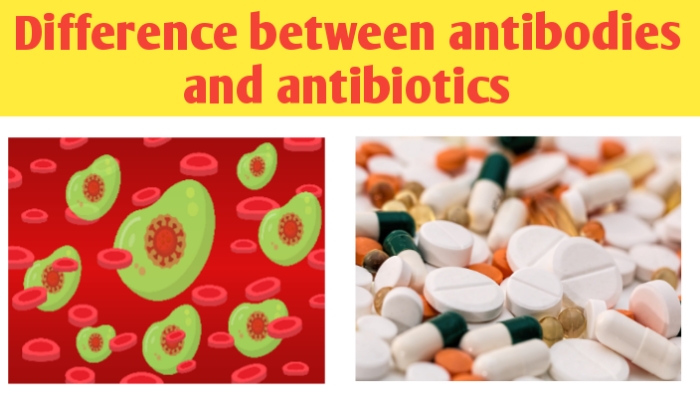 Peoples are confusing in similar words antibodies and antibiotics, in fact both terms are related with your immune system that fight against several harmful pathogens microbes, virus and bacteria. Difference is that antibodies are formed inside your body by plasma cells itself where as antibiotics is chemical drugs taken outside from our body for health benefits.

What are antibodies and antibiotics?

Antibodies are a protein that is produced by plasma cell of B lymphocytes cells after stimulation by an antigen to kill or remove foreign pathogens like bacteria, microbes, virus, fungus, etc.

Antibiotics are group of medicines that is to fight against infection caused by bacteria, to treat infections by killing or utilising the growth of bacteria, first antibiotics was discovered as penicillin.

Antibody is a protective protein produced by immune system in response to the presence of foreign substances called antigen like bacteria, fungus, viruses to kill them or remove them from the body.

Antibodies define as the specialised protein produced by lymphocyte of B cells in response to the presence of antigen to nutralise them and creating immunity to a specific antigen immunoglobulin In the body.

What is meaning of antibodies?

Antibodies means group of immunoglobin protein produce in the blood that fights disease by attacking and killing the harmful bacteria and fungus, virus, and another’s microorganism also.

What are functions of antibodies?

Functions of antibody are the following:-
1. Antibody helps in the neutralization and blow the parts of surface of bacterial cell and make it ineffective.

2. Antibody function as agglutination in which antibodies glue together foreign cells in two that are attractive target for phagocytosis.

3. Antibody function is precipitation in which antibodies glue together antigen and make it ineffective.

4. antibody act as a complement activation which attacked antigens.

5. Activated B-cell produce plasma cell and memory cell and maintain the immunity in the body.

What are examples of antibodies?

IgA, IgB, IgD, IgM and IgK are examples of antibodies. This is very useful antibodies made of immunoglobulin protein that formed inside our body from beta lymphocytes.

What are important features and characteristics of antibodies?

Important features and characteristics of antibodies are the following:-

1. Antibodies are also known as immunoglobulin is a large Y shaped protein produced by immune system of the body to identify antigen and neutralize them.

2. Antibodies recognise unique molecule of the pathogen called an antigen.

3. Each tip of the”Y” of an antibody contains a paratope analogous to lock that is specific for one particular epitope analogous to key on an antigen allowing these two structures to bind together with precision.

4. Lock and key bending mechanism in antibody can tag of microbes are in infected cell for attack by other parts of the immune system or can utilise it directly.

Antibiotics are bio synthetic drugs or group of medicines that formed from microorganisms like bacteria and fungus and that are used to kill bacteria and to cure infections.

Antibiotics are defined as the antibacterial substance that is used to treat or prevent infections by killing or inhibiting the growth of bacteria into the body that is administered orally or by injection.

What is meaning of antibiotics?

Antibiotics means group of drugs or medicine, chemical that can destroy harmful bacteria in the body and limit their growth. This is the most important type of antibacterial agent for fighting bacterial infections.

What is sources of antibiotics?

What are types of antibiotics?

What are functions of antibiotics?

Functions of antibiotics are the following:-

2. Many bacteria make a cell wall to protect themselves and the antibiotic penicillin block the bacterial process that build the cell wall as a result the growing bacteria become unable to make cell walls and die easily.

3. human cells don’t make a cell wall anyway so penciling cannot have such an effect on us.

What are Examples of antibiotics?

Streptomycin, ampicillin, penicillin, etc are examples of antibiotics to cure disease and fight against infection for health benefit.

What are important features and characteristic of antibiotics?

1. Antibiotics is a substance a drug is to treat bacterial infections.

2. They have no effect on viral infections.

3. Antibiotics is a substance produced by microorganism that selectively inhibit the growth of another.

4. Antibiotics attacks the cell wall of bacterial cell and prevent the cellular function of it.

5. Antibiotics are selective in the action and killing the invading bacteria in our body without causing damage to the host they may target cell membrane cell wall, nucleic acids and ribosomes.

What is the difference between antibodies and antibiotics?

How does antibodies differ from antibiotics?

Antibodies differ from antibiotics is that, antibodies are class of immunoglobulin protein that synthesise in our body from beta lymphocytes, their secretion is stimulated by entry of an antigen in our body from outside source and it fight against harmful pathogens whereas antibiotics are chemical or group of drugs produced by microorganisms which are capable of destroying or inhibiting the growth of other microorganism in our body, and it is taken outside source for health benefits.

1. Antibodies are Y shaped protein molecule produced by B lymphocyte cell to help stop foreign substances antigen from harming the body while antibiotics are the chemical substance produced by microorganism that selectively inhibits the growth of bacteria

2. Antibodies are formed naturally by immune system in the body while antibiotics are synthetic or natural products from plants or microorganism they are verified to prevent infection caused by bacteria

3. Antibodies bind with the antigen found on the pathogen and present the infections killing the antigen while antibiotics attack the cell wall and stop the cellular function of the bacteria

5. Example of antibodies are IgA, IgM, IgD while penicillin, streptomycin, ampicillin are examples of antibiotics.

Conclusions:-antibodies help in the creating strong defence system in the body and antibiotics create medication against bacterial infection.