What are antibodies and interferons?

Antibodies are class of immunoglobin proteins secreted from Beta cells, which have a specific immune response and work as third line of Defence against antigens or microbes, slow in action but give a long lasting protection against antigens.

As we know that interferons are antiviral protein, are a group of proteins diet play a major role in immune system during the first line defence and interferons highway multiple function in the immune system antibody a protective protein what is by immune system response to use pathogens out foreign substances called antigen antibody recognise latch onto and pigeons in order to remove them from the body. 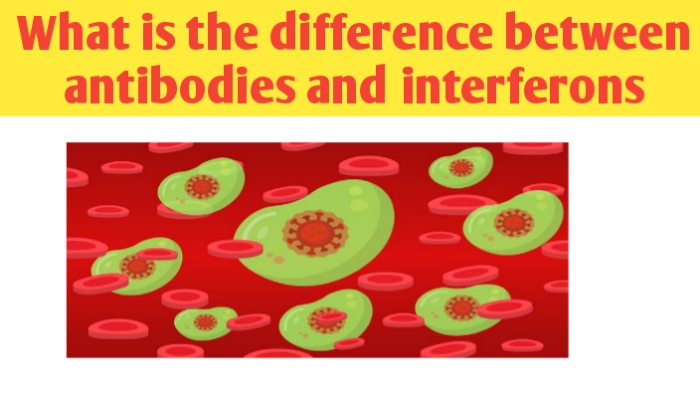 How does antibodies differ from interferons?

The key difference between antibodies and interferons is that antibodies are class of immunoglobin proteins secreted from Beta cells, which have a specific immune response and work as third line of Defence against antigens or microbes, slow in action but give a long lasting protection against antigens whereas interferons are class of antiviral proteins, involve non specific immune response, work as second line defence, quick in action and give temporary protection against microbes.

Hi guys in this article we know about definition of of interferon and antibodies with examples, types and functions and compare between /differences between/ and contest between interferons and antibodies.

Definition of interferon:- interferon of group of signalling proteins made a release by immunogens cell response of presence of viruses, interferons belong to the large class of protein known as cytokines molecules is for communication between cells to trigger the protective defence of immune system that help in the indicating pathogens like a virus interferons are named for the ability to interfere with viral replication by protecting cells from virus infection.

What are the functions of interferons?

The function of interferons are the following:- 1) Interferons help in the activating immune cells such as natural killer cell and macrophage, 2) Interferon increase host defence by up regulating antigen presentation by virtue ofincreasing the expression of major histocompatibility complex antigens, and
3) Interferon can also support suppress angiogenesis by downregulation of stimuli derived from tumor cells.

What are the types of interferons?

Definition of antibodies:- Antibodies or immunoglobin is a glycoprotein that is made by plasma cells in response to an antigen and can be organised and bind to the antigen that cause its production antibodies by and antigen with high degree of specificity and affinity antibodies recognise a variety of three dimensional shapes amino acids lipids and carbohydrate antibodies have more than 1 nitrogen combining site.

What is basic structure of immunoglobulins or antibodies?

What are examples of antibodies?

What is function of antibodies?

What is the difference between antibodies and interferons?

This question is very important for class 8th 9th 10th 11th and 12th students who are preparing for competitive and annual board examination.

List five main differences  /comparison/ distinguish / versus and differentiate between interferons and antibodies are as follows:-

2. Interference leave infected cell and enter nearby healthy cells to dispose of the microbes while antibodies pass into to and circulate in blood and lymph to dispose of antigens.

3. Interference Induce the healthy cell to synthesise antimicrobial protein that check microbial multiplication while antibodies selectively bind to antigen that are immobilized for is attack by phagocytes.

5. Interference act inside cells while antibodies act outside the cells.

What are the features and characteristics of interferons?

Characteristic and features of interferons:-

2. Interferons has no effect on microorganism

4. Interferons have proved effectively in treating cold influenza hepatitis but not succeed against cancer.

5. interferons number increases during the sickness and fever.

Important features and characteristics of antibodies?

Features and characteristics of antibodies:-
1. Antibody consists of 3 globular region of Yshape.

4. The binding between antibody and antigen is reversible and the antibody is affinity towards an antigen is relative red and absolute.

5. Antibodies are consist of five classes immunoglobulins IgA,IgD,IgE,IgM and IgB

Conclusions:- interferons are antiviral proteins and antibody are immunoglobulin which fight against antigen and provide protection of the body from the pathogens.