As you know that nucleic acid are giant molecules having complex structure and very high molecular weight, it contains two types of nitrogenous bases double ring purines and single ringed pyrimidine and two types of Pentose sugars- ribose and deoxyribose, it store and transfer information needed for the synthesis of specific proteins that determine the structure and function of cell. 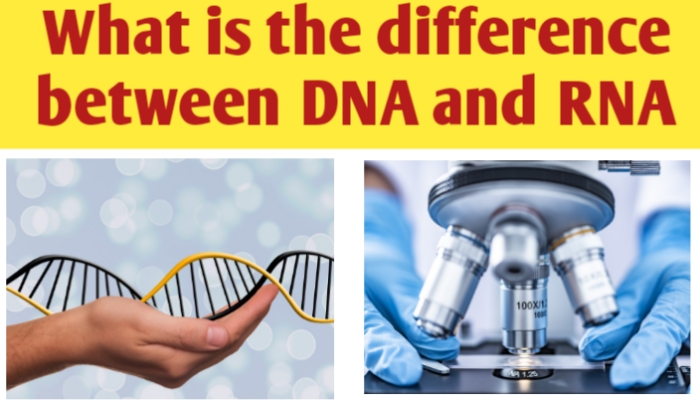 What is the difference between DNA and RNA

There are two types of nucleic acids:- 1) DNA (deoxyribosenucleic acid) and 2) RNA (ribonucleic acid). It is composed of three component pentose ribose sugar, phosphate molecule and nitrogen base purine and pyrimidine.

How do you compare between DNA and RNA?, when you compare between RNA and DNA, RNA is found in the cytoplasm of the cell, confined to the ribosome, to the nucleolus in the nucleus, and it is single chain of ribonucleotide units while DNA, deoxyribose nucleic acid is the Genetic material and forms molecular basis of heredity in all organisms, it is largely confined to nucleus in Eukaryotic organisms and it is the double chains of polypeptides.

Definition of RNA:- RNA (ribose nucleic acids) is a polynucleotide molecules which is made of single chain of polynucleotides, help in coding, decoding, regulations and expression of gene.

Definition of DNA:- DNA is the Genetic material and forms the molecular basis of heredity, it is mainly composed of two polynucleotide chains that coil around each other to form double helix carrying genetic information for development, growth and reproduction of the organisms.

What is the difference between DNA and RNA

This question is very important for class 8th,9th,10th,11th and 12th students those are preparing for competitive and annual board examination.

Regarding this, “what is the difference between DNA and DNA”, the main differences between DNA and RNA are – RNA is single stranded nucleic acid, it contains ribose pentose sugar, it contains Uracil instead of Thymine and it involved in the synthesis of protein while DNA is a double stranded nucleic acid, containing deoxyribose sugar, it contains Thymine a nitrogenous bases and it involves in transmits genetic and heredity information.

YOU CAN SEE ALSO THIS VIDEO

2. It is a single chain of polynucleotides.

3. Its quantity varies in different cells.

4. It mainly occurs in the cytoplasm,a small quantity is found in the nucleus.

5. It is formed by DNA and can not replicate itself.

8. Its molecule is is relative shot containing 70-12000 nucleotides and molecular weight is relative low.

9. It is a genetic material in some viruses, it contains unusual bases in addition to the normal ones.

11. No primer is needed for transcription of RNA, it forms ribosomes,RNA is hydrolysed by the enzyme RNA-ase.

13. RNA does not show helical coiling ,no primer is needed for its transcription.

2. It is a double chain of polypeptides.

3. Its quantity is fixed in each of cell of a species,except gametes.

4. It mainly occurs in the nucleus, a small quantity is found in mitochondria and plastids.

5. It can replicate itself

6. It is the main constituent of chromosomes, it controls structure, metabolism, differentiation, heredity and evolution.

7. It is of mainly two types : linear intranuclear and circular extranuclear.

8. Its molecule is very long millions of nucleotides pairs and molecular weight is vey high.

9. It is genetic material in all organisms,it doesn’t contain unusual bases.

11. A primer is needed for replication of DNA, it forms chromosomes, DNA is hydrolysed by the enzyme DNA-ase.

13. DNA shows regular helical coiling , a primer is needed for its replication.

DNA is very basis of life, it contributes to the evolution of the Organisms and brings about differentiation of cells during development, while RNA brings about protein synthesis in the cell, it is genetic material in some viruses.