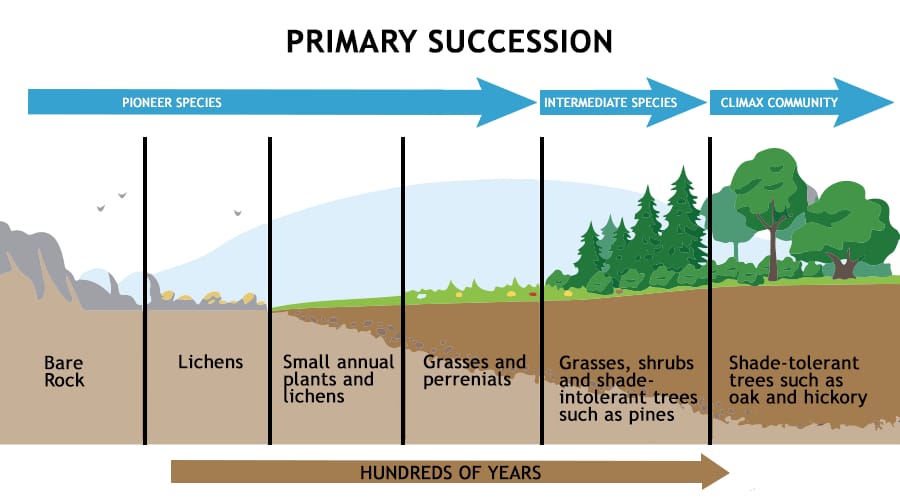 Important characteristic of all community is died their composition and structure constantly change in response to the changing in environmental conditions. This change is orderly and sequential parallel with a changes in the physical environment. This changes laid finally to a community that is in near equilibrium be the environment and that is called climax communities. The gradual and fairly predictable change in a species composition of given area is called ecological succession. During succession some species colonize in area and their population become more numerous where is populations of other species decline and even disappear. Entire sequence of community that successively change in a given area are called seres. The individual transitional community are termed seral stages or seral communities. The present day community in the world have come to be because of the succession that has occurred over millions of years since life started on earth. Success a process that starts in an area where no living organisms are there which could be areas where no living organism ever existed ,say bare rock or in areas that somehow lost all the living organisms that existed there.

1. The gradual and fairly predictable change in the species composition of a given area is called

2. The entire sequence of communities that successively change in a given area are called

3. Examples of areas where primary succession occurs are
(a) newly cooled lava
(b) bare rock
(c) newly created pond or reservoir
(d) all the above

5. The changes lead finally to a community that is in near equilibrium be the environment and that is called

8. Species that invade a bare areas are called

9. The succession begin in the areas where natural biotic communities have been destroyed such as in abundant farmlands burned or cut forests , lands that have been flooded.

10. Ine primary succession in water the pioneers are the small

(a) zooplankton
(b) phytoplankton
(c) lichen
(d) all the above

11. In secondary succession the species that invaded depend on the

12. Which is correct about characteristic of succession

13. Phytoplankton is component of

14. Ultimate source of energy for living beings is

15. Great barrier reef along east coast of Australia is

16.An Ecosystem is not

18. Most primary productivity of pond is by

21. Secondary productivity rate of formation of new organic matter by