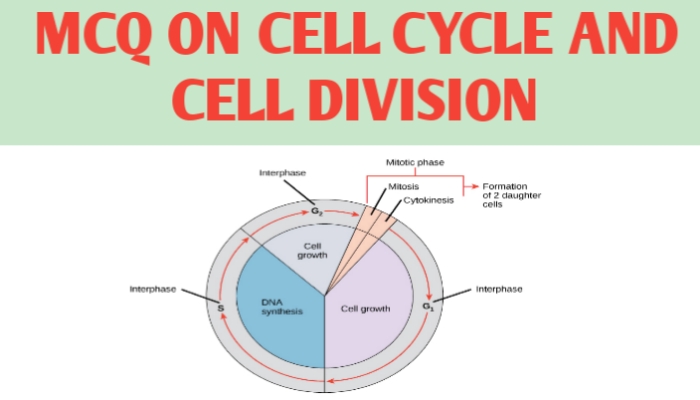 Introduction:-
Are you aware that all organisms , even the largest , start their life form a single cell ? Growth and reproduction are characteristics of cells , indeed of all living organisms.All cells reproduce by dividing into two , with each parental cell giving rise to two daughter cells each time they divide.These newly formed daughter cells can themselves grow and divide , giving rise to a new cell population that is formed by the growth and division of a single parental cell and it’s progeny.

MCQ ON CELL CYCLE AND CELL DIVISION class 11 for NEET

1. The cell cycle of human cells approximately is

2. Division of nucleus is

(a) karyokinesis
(b) cytokinesis
(c) M phase
(d) All the above

3. Division of cytoplasm is

(a) Karyokinesis
(b) cytokinesis
(c) interphase
(d) none

4. The phase corresponds to the interval between mitosis and initiation of DNA replication is

5.The period during which DNA synthesis or replication takes place is

7. In animal cells, during the S phase ,DNA replication begins in

8. In animal cells during S phase of , DNA replication begins in the nucleus and centriole duplicates in the

9. Proteins are synthesised in preparation for mitosis while cell growth continues.

11. In animals , mitotic cell division is only seen in the diploid

12. The plants can show mitotic divisions in

13. The phase which is marked by the initiation of condensation of chromosomal material.

(a) prophase
(b) metaphase
(c) anaphase
(d) all the above

14. At the metaphase stage , metaphase chromosome is made up of two sister chromatids , which are held together by the

(a) centromere
(b) kinetochore
(c) chromatids
(d) none of above

15. Which phase is characterized by centromeres split and chromatids separate , chromatids move to opposite poles.

(a) prophase
(b) metaphase
(c) anaphase
(d) all the above

16. Nucleolus , Golgi complex and ER reform at which phase of mitosis

17. A very significant contribution of mitosis is

18. The division in the merismetic tissues the apical and the lateral cambium , result in a continuous growth of plant throughout their life.

19. The specialised kind of cell division that reduces the chromosome number by half results in the production of haploid daughter cells.This kind of division is called

(a) leptotene
(b) zygotene
(c) pachytene
(d) all the above