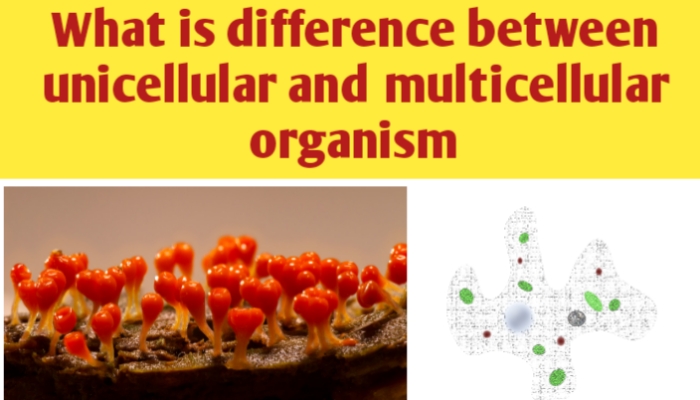 What is difference between unicellular and multicellular organism

The organism categorise into two types according to number of cells present in body, the organisms possese presence of single cell are known as unicellular which have cellular organisation and those comprise of many cells are known as multicellular have tissue and organ system organisation.

There are various organism type are looking around us some of these are microscopic, minute, naked, very small, tiny living particles, comprise of single cell, not seen and feels their presence by us represent unicellular organism, and presence of those organism which are seen by us naturally, feels their presence, comprise many cells, generally represent multicellular organism which are larger in size.

What is difference between unicellular and multicellular organism

Comparison between unicellular and multicellular organisms are follows:-

1) Its body composed of a single cell.

2) A single cell carries out all the life functions.

5) sexual reproduction, if present,occurs only once during the life.

6) A cell body can not attain a large size, limit being imposed by surface area to volume ratio.

7) Life span of unicellular organisms is short due to heavy load of work.

9) Power of division is not impaired

10) Capacity of regeneration is well marked

11) Cell has the same role of itself and the organism.

12) Division of labour is at a the organelle.

13) It has a low level of operational efficiency.

14) Cell body has to face the environment on all sides.

15) cellular organisms depend upon their own intrinsic information.

16) Ageing is often absent as a mature cells divides into daughters.

1) Have a body composed of numerous cells.

3) Injury or death of some cells does not affect the organisms as the same can be replaced.

5) Sexual reproduction is repeated many times during the life.

6) Many-celled body can attain large size by increasing the number of cells.

7) Life span of multiple cellular organisms is long due to limited load of work for each cell type.

8) Only germ cells in the multiple cellular organisms are immortal that can pass onto the next generation.

11) Cells have a double role, one for themselves and the other for the organism

12) Division of labour may be at cellular, tissue, organ and organ system level.

13) It has high degree of operational efficiency.

14) In multicellular organisms, only outer cells have to face the environment, inner cells can devote to other functions.