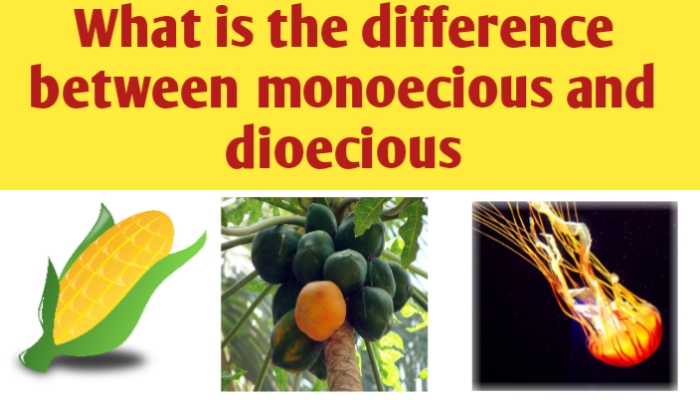 What is the difference between monoecious and dioecious

Definition and examples of monoecious

Definition of monoecious:- A monoecious plants is one that has male and female flowers on the same plant in separate structure. For example, corn, oak and walnut

Definition and examples of dioecious

Definition of dioecious:- A dioecious plant is one that has male and female flowers on different plants. For example papaya and marijuna.

What is the difference between monoecious and dioecious

This question is very important for class 8th, 9th 10th,11th and 12th students who are preparing fo competitive and annual board examination.

1. Monoecious organisms have both male and female reproductive organs.

2. Examples of monoecious are planarians, slugs, jellyfish and earthworms.

3. It consists of male and female unisexual flowers in the same plant.

4. It is bisexual in nature.

5. It produces both male and female gametes by same plant.

7. Plants are capable of using both self and cross pollination.

8. It is capable of reproducing even when they are isolated.

9. There is less genetic variation in inbreeds.

11. It has limited genetic pool, has unilateral parentage.

12. In monoecious plants can leads to inbreeding and reduces the genetic variation within populations.

2. Examples of dioecious are birds, mammals, reptiles and insects.

3. It consists of unisexual flowers where male and female flowers are on separate plants.

4. It is unisexual which can be either male or female.

5. It produces male and female gametes in separate plants.

7. Plants are capable of only cross pollination.

8. It is incapable of reproducing when they are isolated.

9. There are increased variability and heterozygosity in inbreeds.

11. It has wider genetic pool and unilateral or bilateral parentage.

12. Dioecious organisms exchange genes with other organisms of the species during sexual reproduction, increasing heterozygosity and variability.