You all know about the all organisms are composed of cells, which is the basic structural and functional unit in all living organisms, according to the availability of cell walls, plastids, centrioles and large central vacuole, the cell categories into two types- plant cells and animal cells. 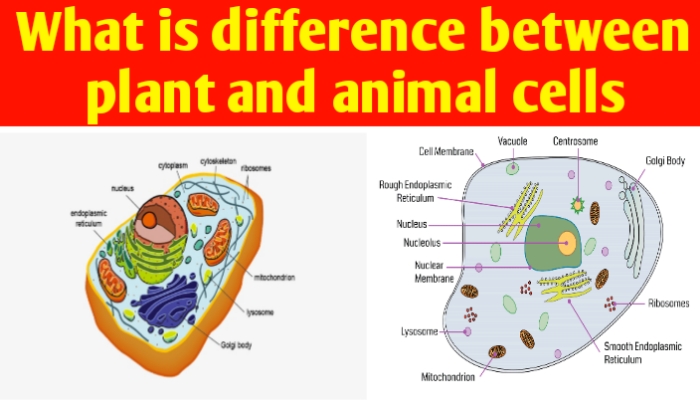 What is difference between animal and plant cell

Hi guys in this articles we know about definition of animal cell and plant cell with examples and compare/ differences/ contrast/ distinguish between plant and animal cells, this question is very important for class 8th, 9th, 10th, 11th and 12th students, those prepare for competitive and annual board examinations.

Definition of animal cells:- An animal cells is type of eukaryotic cell which possess true nucleus and specialized structures called organelles, that carry out different functions and it has centriole carries out formation of spindles and centrosomes which helps in cell division of cells.

What is difference between animal and plant cells

This question is very important for class 8th,9th,10th and 12th students and those preparing for competitive and annual board examinations.

Regarding this,“what is difference between animal cells and plant cells,” as you know all eukaryotic cells are not identical, animal cells and plants cells are different as the animal cells do not possess cell walls, plastids, and a large central vacuole but having centrioles, contractile vacuoles and enclosed a thin flexible living membrane only while plant cells possess cell walls in addition to plasma membrane, plastids and a large central vacuoles are also found.

Comparison/ difference between animal and plant cells are as follows:-

1. Animal is enclosed by a thin flexible living plasma membrane only.

2. It has many small temporary vacuoles, its nucleus is generally near the centre.

3. Centrosome is present practically in all animal cells, plastids are absent so there is no chlorophyll pigment in it.

5. Intermediate fibres are often present forming a part of cytoskeleton, crystals are not present there, contractile vacuole is available in it, plays important role to pump out excess water.

8. Animal cells are much smaller than hundred micrometre, glyoxysomes are lacking in the animal cells.

9. Spindle formed during cell division is amphiastral, has an aster at each pole, cytoplasm always devides by furrowing.

10. If animals cell placed in a hypotonic solution it swell up and burst due to lack of cell wall.

11. It stores carbohydrate as glycogen.

12.. Golgi apparatus occurs as a single or a few scattered units called dictyosomes.

13. Tight junctions are desmosomes are present between cells, rough endoplasmic reticulum is abundant.

15. Only zygote and stem cells of early embryos are totipotent,having capacity of a living nucleated cell to differentiate into any type of cell.

1. Plant cell is enclosed by a thick, rigid, dead cell wall in addition to plasma membrane.

2. It has a large permanent sap vacuole, its nucleus is pushed to one side in the peripheral cytoplasm by the sap vacuole.

3. Centrosomes occurs only in mitotic cells of lower plants, plastids are usually present, containing chlorophyll in it.

5. Intermediate fibres are lacking, crystals are present, there is no contractile vacuole in it.

7. Plant cell can synthesise all the amino acids, coenzymes and vitamins.

8. Plants size are well over 100 micrometre,
glyoxysomes are present.

9. Cytoplasm divides by cell plate method and spindle formed during cell division is anastral without asters at the poles.

10. If plant cell placed in a hypotonic solution, plant cells do not swell up or burst due to presence of cell wall.

15. All plant cells are totipotent that is capacity of a living nucleated cell to differentiate into any type of cell.