LH and fsh in males: LH and FSH hormone

LH and fsh in males are hormones that both are secreted from interior pituitary glands and control the development of testis, sperm maturation, secretion of testosterone hormones and spermatogenesis.

LH and fsh hormone are also found in women in which the control the development of primary follicles, menstrual cycle ovulation and implantation of embryo.

LH and fsh in males

LH and fsh in males hormone are under the control of hypothalamus. Release of fsh and LH in males control by release of hypothalamic gonadotropin-releasing hormone. In seminiferous tubules of testis there are two types of cells Leydigs cells and sertoli cells. The hormone LH act on leydig cells of seminiferous tubules to release testosterone hormone. that’s why release of testosterone hormone are under the control of LH hormone.

And growth maintenance and functioning of secondary sex organs epididymis, vasa deferentia, accessory glands of testis and penis are under the control of testosterone hormone.

Both are sex hormone secreted both in male and female and control the many function like a sperm maturation sperm formation in male and maintaining follicular development menstrual cycle, ovulation, implantation and development of embryo during pregnancy in female. Student wants to know LH and fsh full form. LH full form is Luteinizing hormone and FSH full form is follicle stimulating hormone.

LH and fsh are collectively called

Luteinizing hormone and follicle stimulating hormone represented by LH and FSH respectively secreted from anterior pituitary gland and both LH and FSH are collectively called as gonadotropin hormone.

Luteinizing hormone (LH) and follicle-stimulating hormone (FSH) are called gonadotropins because stimulate the gonads testes in male and ovary in female. LH and fsh in males are not necessary for life, but are essential for reproduction.

These two hormones are secreted from cells in the anterior pituitary called gonadotrophs. Most gonadotrophs secrete only LH or FSH, but some appear to secrete both hormones.

Structure of LH and fsh hormone

LH and FSH in males hormones are large glycoproteins composed of alpha and beta subunits. The alpha subunit is identical in all three of these anterior pituitary hormones, while the beta subunit is unique and endows each hormone with the ability to bind its own receptor.

In females reproductive systems during the early period of menstrual cycle LH and fsh ratio are generally same.

So follicle stimulating hormone responsible for development of follicles and secretion and control of oestrogen hormone in female reproductive system.

Both fsh and LH are responsible for oogenesis in female and formation of ova and singular known as ovum. 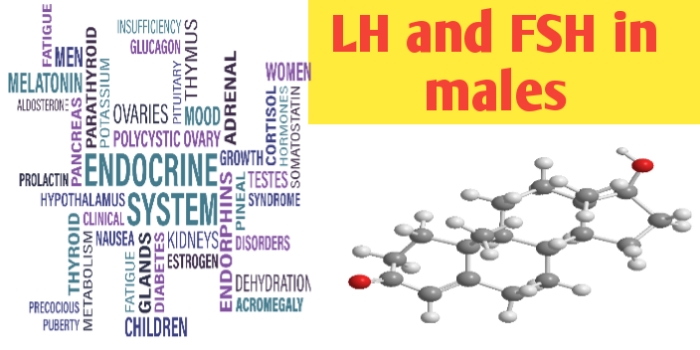 LH and fsh in males: LH and FSH hormone

After ovulation period there is decrease in level of LH hormone and continue to decrease gradually upto coming next mens period. Residual cells within ovulated graffian follicles proliferate to form corpora luteum, which secrete the steroid hormones progesterone and estradiol.

LH and fsh in pregnancy

During the first weeks of gestation period Vishal level of LH and fsh and the response to LRH all decrease.

The increasing level of progesterone and presence of appropriate amount of oestrogen in pregnant women may be responsible for diminishing pituitary secretion of LH and fsh hormone.

Low LH and fsh in males

Low secretion of LH or FSH in males can result in failure of gonadal function of testis known as hypogonadism . This condition is typically manifest in males as failure in production of normal numbers of sperm and release of sex hormone testosterone.
Low secretion of LH and fsh in males adversely affects function of seminiferous tubules and sertoli cells, and also effects on sexual Desire in male and attraction toward female parter or opposite sex

High LH and fsh in males

Elevated or high LH and FSH in males blood levels of gonadotropins usually reflect lack of steroid negative feedback. Removal of the gonads from males as is commonly done to animals, leads to persistent elevation and rise in LH and FSH level.

In humans excessive secretion of FSH and LH most commonly the result of gonadal failure and dysfunction of testis or pituitary tumors. In general, elevated or high levels of gonadotropins like LH and FSH have no biological side effect.

LH and FSH in male infertility

LH and fsh in pcos

8) estrogen ,TSH and glucose and cholesterol HDL and LDL level

But in case of women with polycystic ovarian syndrome still have LH and fsh with normal limit 5-20 mlU/ml range but difference is that LH level is average three times that of fsh level.