Difference between Menstrual and Oestrous cycle:- in menstrual cycle the unfertilized ovum along with rupture uterine epithelium about 50 -100 ml of blood and some mucus is discharge out through the vaginal orifice and it is called menstrual flow whereas oestrous cycle represent female become sexually responsive is found only in particular season, this period of sexual responsiveness of female is called oestrous cycle or heat period there is no outflow from vagina, endometrium is reabsorbed. 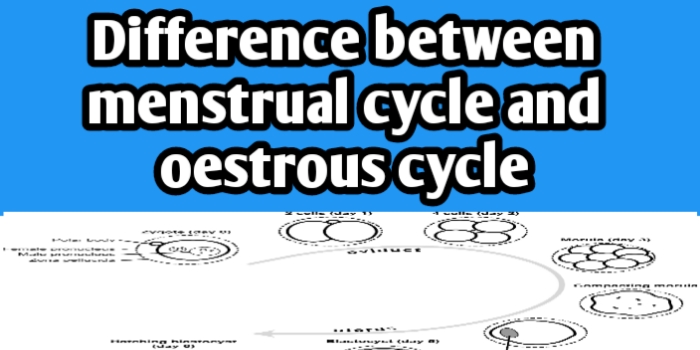 Difference between Menstrual and Oestrous cycle

In this article we talk about menstrual versus oestrous cycle. In menstrual cycle when ovum remain unfertilize then Corpus luteum is start the degenerating, the level of progesterone in the blood declines, the uterine tissues is fail to be maintained then the unfertilized ovum along with uterine epithelium and about 50 to 100 ml of blood and some mucus discharge out to the vaginal orifice and is called menstrual flow or menstruation.

Most of the mammals are seasonal breeders and breed only in some specific Period of the Year, in such animal the female become sexually responsive only in particular season. Breeding season is autumn for sheep and Spring and autumn for bitches. But in some mammals like cow, buffalo oesstrous cycles occur throughout the year and there is no specific bleeding season. This period of sexual responsiveness of female called oestrous cycle or heat period. It is generally short duration 18 hour in cows it is generally followed by an anaestrous during which female does not copulate with male.

Most of wild animals are monoestrous in sheep, deer etc. Rats and mice breed as frequently as every five days and guinea pig every 15 days so are polyoestrous.

Some of the major differences between menstrual and oestrous cycles of organisms life are as follows:

★ Menstrual Cycle:
1. It occurs in primates (monkeys, apes and human beings) only.

3. Blood flows in the last few days of this cycle.

4. The broken endometrium is passed out during menstruation.

5. Sex urge is not increased during menstruation.

6. Female does not permit copulation during menstrual phase of the cycle.

★ Oestrous Cycle:
1. It occurs in non-primates such as cows, dogs, etc.

2. It consists of a short period of oestrous or heat (e.g., 18 hours in cow) followed by anaoestrous or passive period.

3. Blood does into flow in this cycle.

4. The broken endometrium is reabsorbed.