Difference between morula and blastula:– Morula – at-32 cell stage after cleavage of zygote embryo is now solid ball of cells which look like “little Mulberry” is called morula which is formed of two types of cells outer micromeres and inner macromeres whereas Blastula are hollow Larva with blastocoel (segmentation cavity) in centre surrounded by outer nutritive layer trophoblast and inner cell mass embryonal knob. 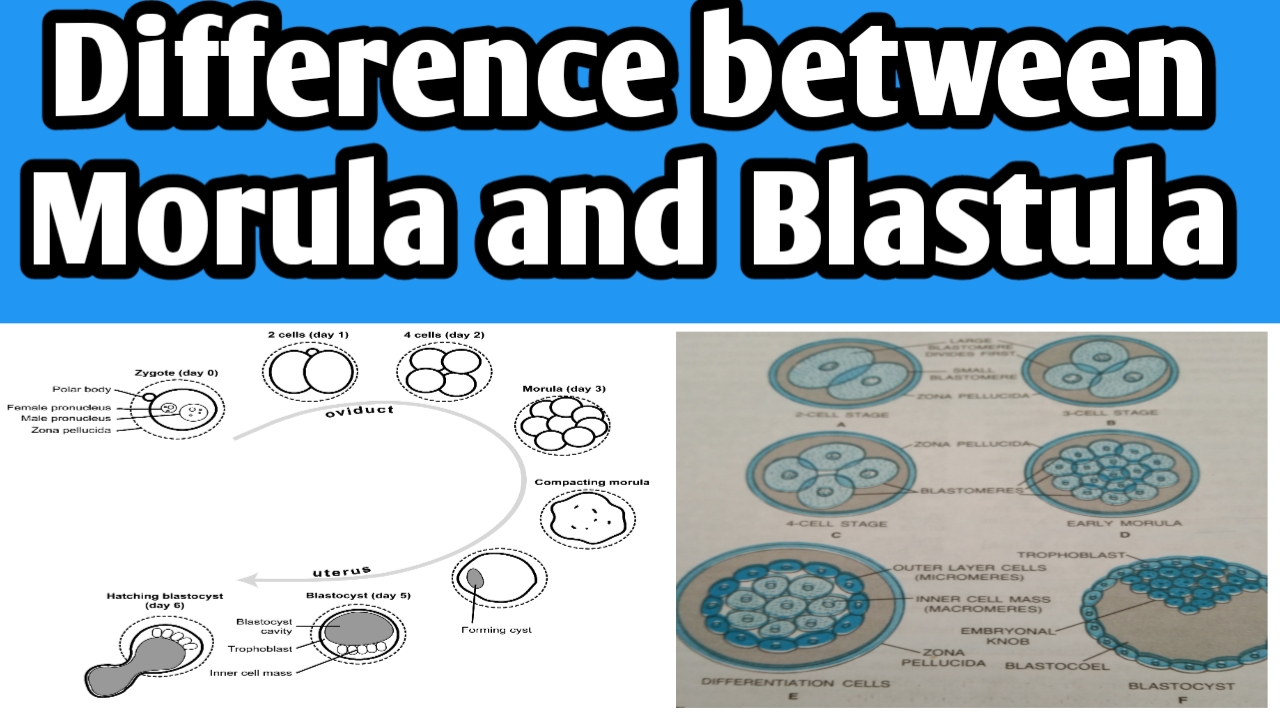 Difference between morula and blastula

Formation of Morula:- repeated cleavage occurs in fallopian tube during conduction of zygote towards uterus, cleavage may be holoblastic, radial, indeterminate and unequal. First cleavage is maridional (vertical) along animal vegetal pole axis. Zygote divide into unequal cells called blastomeres. Second cleavage is also meridional but perpendicular to first and take first in large blastomere. Subsequent cleavage proceed one after another in orderly manner but are Rapid and do not accopanied by growth so with cleavage the resultant blastomere become smaller and smaller so cleavage is fractionating process.

The embryo is now a solid ball of cells which looked like “little Mulberry” so it is called Morula. It is about 32 cell stage and reaches the uterus about 72 hours after fertilization still surrounded by zona pellucida due to holoblastic and unequal cleavage blastomere of two types:- 1) Micromere and 2) Macromere. Micromere are peripheral, smaller and transparent and Macromere are Central and larger cells.

Formation of blastula ( Blastocyst):– it involves the dynamic rearrangement of blastomeres the outer layer of cells become flat and form trophoblast which draws the nutritive material secreted by uterine endometrial glands, the fluid absorbed by trophoblast collect in new Central cavity called blastocoel. Is the amount of nutritive fluid increases in blastocoel Morula enlarge and take the form of cyst now it is called as blastocyst or Blastula.

The cells of trophoblast do not participates in formation of embryo proper, these cells forms only protective and nutritive extraembryonic membranes which later form foetal part of placenta eg Chorion for placenta formation, Amnion for protection from injury and dessication.

Inner cell mass of macromeres form a knob at side of trophoblast and forms an Embryonal knob and is primarily determined to form body of developing embryo so it is known as precursor of the embryo.

Difference between morula and blastula is given in the following table:-

◆ Morula:-
1) solid ball of Larva which look like little Mulberry is known as Morula

2) Morula is formed at 32 cell stage of embryo

3) Morula is comparatively smaller than blastula

5) Morula is made of two types of cell a smaller micromere and larger macromere.

◆ Blastula:-
1) A hollow Larva with a blastocoel (segmentation cavity) in the centre formed of outer nutritive layers Trophoblast and inner cell mass known as embryonal knob

3) blastula is comparatively larger than morula

4) Blastula is surrounded by outer nutritive layer known as trophoblast