Human Placenta is defined as a temporary intimate mechanical and physiological connection between foetal and maternal tissues for the nutrition, respiration, excretion etc of the foetus. it is invariably associated with the viviparity of the organism.

Human beings are mammals and viviparous the development of their young is intra uterine that is inside the uterus of mother. But there minute eggs content so Little yolk that they could never develop beyond the very early stages unless additional nourishment is somehow provided by the mother. This is done by the formation of characteristics organ known as placenta by which the embryo established close contact with the uterine wall of mother. 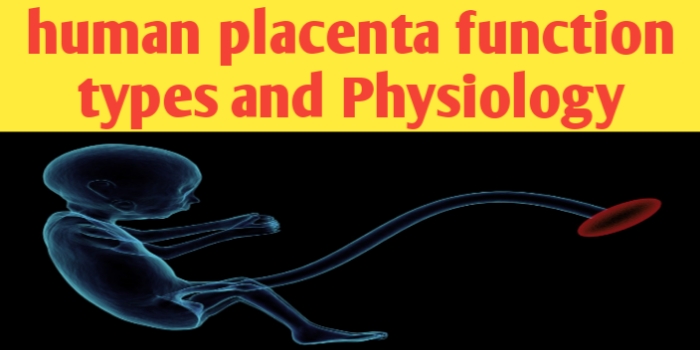 The term human Placenta may be defined as the structure by which the developing embryo or foetus of viviparous mammals like human being obtain its nourishment from the maternal uterine blood. it is formed by the interlocking of both foetal as well as maternal tissues.

The part derive from foetus is known as fetal placenta and the part derived from uterine wall is known as maternal placenta. So the term placentation may be defined as intimate relation between portion of maternal uterine wall and part of or whole of chorionic membrane or trophoblast of embryo for the purpose of Nutrition, respiration and excretion.

For Placenta formation the surface of blastocyst finger like outgrowth known as chorionic villi, which interdigitate into corresponding depression known as crypts, in The Wall of the uterus. Finally the choroinic villi will fuse with the eroded uterine mucosa of mother to form a true Placenta known as Placenta vera.

Human Placenta derived from cells have mesenchymal stem cells ( MSC) or progenitor cell. The placenta functions as a foetomaternal organ with two components: the fetal placenta known as Chorion frondosum, which develops from the same blastocyst that forms the fetus, and the maternal placenta known as Decidua basalis which develops from the maternal uterine tissue.

Initially the chorionic villi are distributed on the whole surface of blastocyst but later the major part of blastocyst is exposed and choroinic villi disappear from the expose part and remain only on a disc like area to form metadiscoidal placenta.

The human Placenta is fully formed in 10 weeks and last throughout pregnancy. The Placenta is connected to the embryo through an umbilical cord. The part of placenta contributed by foetus is known as foetal Placenta while the part formed by the mother is known as maternal placenta, mainly formed of decidua basalis known as decidua.

The decidua Placenta in human formed of three zones, outer decidua basalis which is part of endometrium where the blastocyst is embedded, middle decidua parietalis and inner decidua capsularis separates blastocyst and uterine cavity. So the human Placenta is chorionic and metadiscoidal. 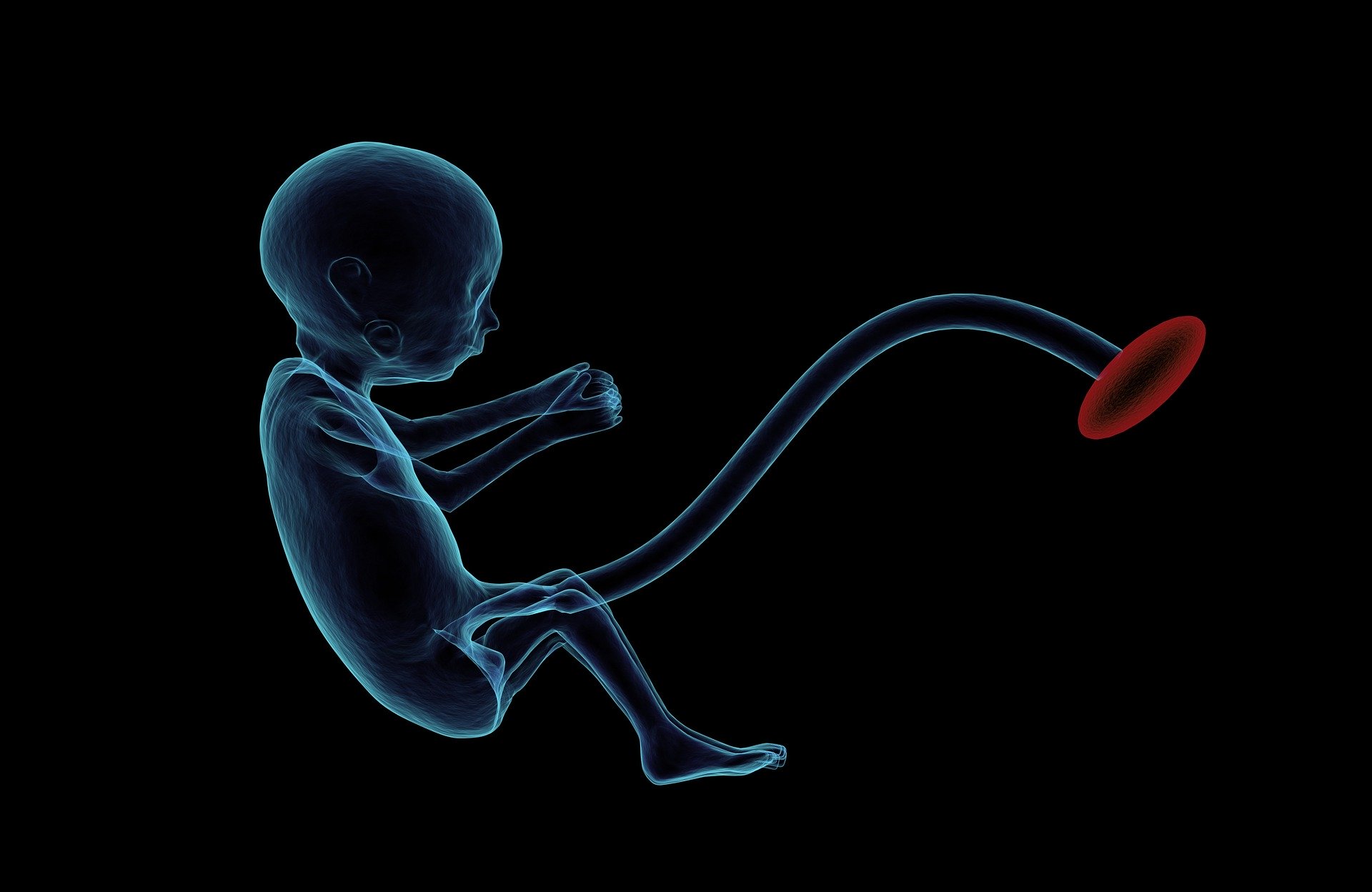 Human placenta type are chorionic and metadiscoidal, haemochorial placenta and deciduate placenta. Origin and detail of shape and structure of placenta human Placenta is classified according to nature of extraembryonic membrane involve, distribution of Villi and shape of placenta and degree of intimacy between foetal and maternal tissues.

Depending on the foetal membrane forming placenta human placenta is classified as chorionic placenta. In this Placenta the surface of blastocyst gives rise to finger like outgrowth known as chorionic Villi, which is embedded into the wall of uterus. And finally the chorionic villi fuse with the eroded uterine mucosa to form true Placenta known as Placenta Vera.

Depending upon shape and distribution of chorionic villi, degree of connection between foetal and maternal tissues and behaviour of placenta at the time of birth the human Placenta is classified as deciduate placenta. Chorionic villi are complicated branched and intimately connected. At birth time, of variable amount of maternal tissues is pulled out with the shedding of the blood.

deciduous or deciduous Placenta is present in human beings are type of metadiscoidal in which villi are at first scattered but later become restricted to one disc so it is monodiscoidal in man.

On the histological basis the human Placenta is classified as Haemochorial placenta in which all three maternal tissues of placenta uterine epithelium, endometrial mesenchymal connective tissues and endothelium of maternal blood capillaries have been digested by the trophoblast of the chorionic placenta. So the chorionic villi are bathed directly into the maternal blood tissues.

HCG maintains the Corpus luteum for the continuous secretion of progesterone to maintain the pregnancy. At the end of gestation period human Placenta also secrets relaxin hormone which help in softening of pubic symphysis and childbirth. It also secrets a small amount of chorionic thyrotropin, chorionic corticotropin and chorionic somatomammotropin.

What is human placental lactogen?

Human placental lactogen in short HPL, is a hormone released from the placenta during pregnancy of women. The placenta is a structure in the uterus that provides nutrients and oxygen to a foetus.

If you are expecting, you will probably hear about your human placental lactogen (HPL) levels occasionally. Here’s what you need to know about this hormone, including its function and how your levels are tested.

1) Metabolism regulation:- Human placental lactogen helps to regulate and control metabolism, which is the use of fats and carbohydrates for energy. This helps to break down fats from foods more efficiently, allowing them to be used as energy. It also helps to free up glucose (sugar) for the fetus.

2) Insulin resistance. Human placental lactogen also makes your body less sensitive to the effects of insulin hormone, a hormone that moves glucose from the bloodstream into the cells. This also leaves more glucose available in your bloodstream to nourish the fetus.

3) lactation :- human placental lactogen has some effect on lactation also, it stimulate mammary glands to fore milk. its exact role in stimulating milk glands in the breasts allow to secrete milk.

What are the human placenta function ?

There are many function of human placenta

1) Placenta help in nutrition of embryo as the nutrient like amino acids, mono Sugars, vitamins etc pass from the maternal blood into fetal blood through placenta.

5) placenta store the glycogen till the formation of liver

7) through the Placenta act as an effective barrier for certain toxic chemical like histamine but certain germs like AIDS virus, syphilis bacteria, virus of German measles, and intoxicant like nicotine of cigarette, smoke and addictive drugs like Heroin and cocaine can pass through the Placenta and cause the developmental defect.