◆introduction :- in this topic we know about common types of asexual reproduction. Asexual Reproduction found in protozoan protista, fungi ,algae some plants and even some animal. There is several process of Asexual Reproduction like fission, budding, fragmentation, regeneration and spore formation.

what is definition of clone

Morphological and genetical similar individuals which are produced by Asexual mode of reproduction is known as clone.

1) asexual reproduction does not involves formation and fusion of gametes 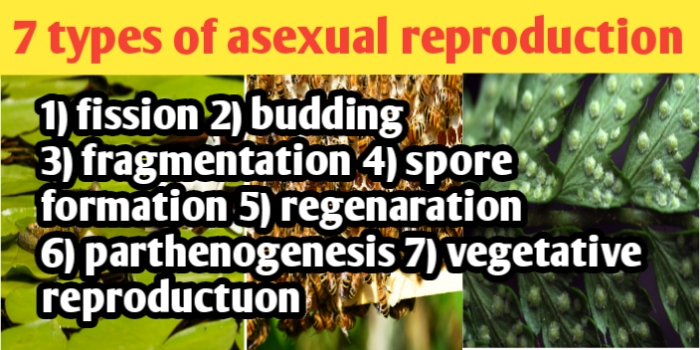 that type of Asexual mode of reproduction in which one parental body of organism divides into two or more daughter cells is known as fission. In the fission process whole parental body is reproductive unit.

A) binary fission
B) Multiple Fission

during the favourable condition of environment adult parental body get divide into two equal daughter cells is known as binary fission. This is the simplest and most common method of Asexual Reproduction found in protist (amoeba euglena), bacteria ,green algae (chlamydomonas) and Planarian (flatworm). In binary fission the karyokinesis that is division of nucleus is followed by cytokinesis that is division of cytoplasm so nothing is left with the parents ,daughter cells feed grow and repeat the process that’s why organism which are undergoing binary fission are also known as immortal.

Types of binary fission on the basis of plane of cytokinesis

in this mode of binary fission process of cytokinesis take place along any plane but its plane is always perpendicular to that of karyokinesis , for example it is found in amoeba

that type of Asexual mode of reproduction in which the parental body divide into many daughter cells during unfavourable condition, by the formation of triple layer of cyst wall. During Multiple Fission the nucleus of parents body divide repeated by amitosis into many nuclei. Multiple Fission is found in number of organism like plasmodium and amoeba

that type of Asexual mode of reproduction in which one or more unicellular multicellular outgrowths called as buds are formed on or inside the parents body, each multicellular our growth bud enlarge develop the parental characters and separated from parents body grow and develop into new adult organism by the process of budding, budding is found in a sponge, hydra and unicellular fungi yeast .

In hydra and Scypha the buding is external type in which bud is formed on the outer surface of parental body that is known as external bud.but in spongilla freshwater sponge buding process is internal and number of buds known as gemmules are formed inside the parents body.

zoospores are flagellated motiles naked protoplasmic body. Formation of zoospores found in ulothrix. And in non motile spore that is known as conodia are found in Penicillium notatum

that type of asexual reproduction in which organism renewal Restoration growth of several lost part of body like cells tissue and organs, regeneration process is found in planaria

parthenogenesis is mode of asexual reproduction in which development of an unfertilized ovum into fully formed haploid organisms. This mode of reproduction is found in number of invertebrates aphids and honey bees and some vertebrates like Turkey and some Birds.

1) irregular binary fission found in which of one of following

2) longitudinal binary fission is found in which one of following

8) apomixis is also known as which one of following

A) offspring
B) clone
C) blastos
D) none

10) regeneration process is found in which one of the following