Enzymes for carbohydrate digestion and their physiology

There are several macro biomolecules like carbohydrates, proteins fats required to digest it for simple absorption by means carbohydrate can produce energy and we know every work require energy,

Lack of these digestive enzyme or infection of glands which produce enzymes for carbohydrate digestion leads to you know proper digestion of carbohydrate and you are suffering from malnutrition.

Parotid glands are the largest salivary glands which produce enzymes for carbohydrate digestion lies on the side of the face just below and in front of the ear. the parotid duct also called stensen duct open into the vestibule opposite the upper second molar teeth, some time viral infection of parotid glands causing swelling and pain and this disease is known as mump.

Second salivary gland is sublingual gland lies under the front part of tongue and it is connected with duct known as sublingual duct or ducts of Rivinus and also open under the tongue.

Saliva released from salivary glands basically neutral being pH 6.7 . The Saliva is carried into the buccal cavity by the salivary ducts about 1 to 1.5 litre of saliva and mucus are secreted daily in the buccal cavity. Saliva lack of amylase in domestic herbivorous such as cows buffaloes and carnivorous animals such a dog, tiger, lion and pigs have ptyalin in their saliva.

The salivary glands are under neural control flow of saliva that is known as salivation is activated by the sight, smell, idea and talk of food and by the presence of food in the buccal cavity. 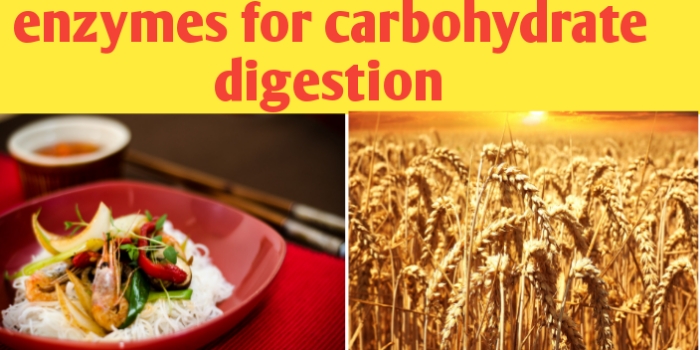 Enzymes for carbohydrate digestion and their physiology

Saliva has many functions

1) saliva moistens and lubricates the buccal mucosa, tongue and lips thus making speech possible. Moistening must be carried on continuously because of evaporation and swallowing of saliva

8) and most important function of saliva is it contain ptyalin or salivary enzymes for carbohydrate digestion.

The pancreas is heterocrine glands means it’s secretes both hormones and digestive enzymes. The pancreas in an elongated gland laying partly behind the stomach in the abdomen. Pancreas is about 16 cm long 2.5 cm wide and weight about 60 grams.

Pancreas consists of head, body and tail. the head is located in the curve of the duodenum and tail meet the spleen. the pancreas is both endocrine and exocrine organ. the tissue of consist of rounded lobules that is known as acini secretes alkaline pancreatic juices with PH 8.8 about a litre of pancreatic juices is secreted each day. This pancreatic juice is carried by pancreatic duct into the duodenum through the hepatopancreatic.

The brunner’s glands are branched tubular gland and are confined to the duedenum only. their secrets alkaline watery fluid and little enzymes and mucus and their open into the crypts of lieberkuhn.

The mixture of secretion from intestinal gland is known as intestine juices and about 2 to 3 litres of intestinal juices is secreted each day it is alkaline pH 8.3 and is poured into the intestine

Carbohydrates are the main source of energy for our body and carbohydrate are formed of carbon, hydrogen and oxygen atoms. Food items such as rice, wheat, Maize ,potato sweet, potato, milk ,chapati, paratha, jaggery sugar, honey and bread are good source of carbohydrate.

Carbohydrates can be classified into 4 categories polysaccharide, oligosaccharide, disaccharide and monosaccharide.

Starch is a complex carbohydrate that can be obtained from wheat, rice ,Maize and potato. it is tasteless and does not dissolve in water so it require to digest and convert into simple sugar or monosaccharide with the help of several carbohydrate digestion enzymes. The enzymes salivary amylase, pancreatic amylase and intestinal amylase produce from salivary gland, pancreas and intestinal gland respectively responsible for digestion of starch in our body.

Glycogen is complex carbohydrate that can be obtained from animal sources from meat of animals and it is also needed to digest it and convert into monosaccharides with the help of several carbohydrate digestion enzymes.

Cellulose is also a testless and complex carbohydrate it is present in cell wall of plant cell ,wood ,jute and cotton and more than 1000 glucose molecules join together to form cellulose fibres, the enzymes cellulase responsible for digestion of cellulose carbohydrate in ruminant stomach.

Lactose also called milk sugar sucrose also called Cane sugar and maltose also called malt sugar are disaccharides and need to be convert into monosaccharide with the help of enzyme like lactase, sucrase and maltase respectively secreted from intestinal gland. These Enzymes responsible for carbohydrate digestion

Monosaccharide like glucose fructose and galactose is simple sugar need not to be digested, it is soluble in our body.

Where does carbohydrate digestion begin ?

All Complex molecule of carbohydrate are digested by by carbohydrate digestion enzymes to monosaccharides like glucose, Fructose and galactose

Secretion of salivary amylase activated by presence of chloride ion in saliva itself. And salivary amylase splits starch and glycogen first into dextrins and then into double sugar maltose and isomaltose and small Dextrins which called as limit dextrins.

Salivary digestion in oral cavity is restricted because of the shorter time the food is retained here. however about 30% of starch in the food is hydrolysed in the oral cavity and lysozyme present in saliva help to kills the microbes.

Mastication of teeth mixes the food with saliva and break it into a small particles with larger total surface area. this facilitates the action of ptyalin. water and mucin of saliva help the teeth in mastication by moistening the food.

Salivary digestion of Carbohydrates continues in stomach till salivary amylase is destroyed by hydrochloric acid of gastric juices. this take about half an hour. the gastric juices secreted from stomach wall itself has no carbohydrase or carbohydrate digestion enzymes.

The enzymes responsible for carbohydrate digestion in intestine are secretion of pancreas and intestinal gland containing pancreatic amylase and intestinal juices.

Thus the entire carbohydrate part of the ingested food is changed into glucose, fructose and galactose and this product of digestion are absorbable.

Cellulose is complex carbohydrate found in cell wall of plant, it is not digested in humans it is digested by symbiotic microorganisms bacteria and ciliates living in the guts of herbivorous mammals.

Digestion of cellulose in large mammals

The symbiotic microorganisms inhabit the stomach rumen and reticulum of ruminant such as cows, buffalo, goat and the large intestine of non ruminants like Ass and horse. they release enzymes cellulases which hydrolyse cellulose to short chain fatty acid such as Acetic Acid, butyric acid ,propanoic acid. These acids are then absorb. digestion of food by microbial activity is also known as microbial or symbiotic digestion

Digestion of cellulose in rabbit

In rabbit cellulose is partially digested in caecum by bacteria that secretes the enzyme cellulase for this purpose. simplified cellulose escapes with the soft semi fluid, light colour, faeces passed out at night. these faeces are eaten of directly from the anus and passed through the gut again now. the simplified cellulose is fully digested and the product of digestion are obsorbed. the faeces passed out during the day are in form of firm, dark pellets are not eaten. The habit of passing food twice through the gut is known as coprophagy or refection.

Intestine of termites Harbour symbiotic flagellates such as Trichonympha which secretes enzyme beta- glucosidase to hydrolysed cellulose to sugar. the latter is absorbed by termites as well as flagellates. so there Association is symbiotic in nature.