* introduction :- ncert solutions for class 12 biology chapter- 2- CBSE-JAC exams and students might be busy in your preparation for coming 12th board Jharkhand academic Council exams.biologysir.com will provide many type of education material like fill in the blanks, true or false matching type questions ,multiple choice questions, very short questions answers type, short questions answer type and long questions type of 12th class Biology from each topic that help you in your preparation.and sexual reproduction in flowering plants

*In this post :- ncert solutions for class12 biology chapter -2- CBSE-JAC exams and we provide you matching type questions with answer from the lesson 2 sexual reproduction in flowering plants

(Q2) differentiate between microsporogenesis and megasporogenesis ?which type of cell division occurs during these events ?name the structure formed at the end of these two events?

(Q4) what is meant by monosporic development of female gametophyte

Ans. Monosporic development of female gametophyte is that process in which only one of the four megaspore take part in the formation of embryo sac, and megaspore is formed by three division of functional megaspore mother cell. 8 nuclei formed in embryo sac in which 3 nuclei arranged at micropylar end and 3 are Chalaza end and two arrange in centre.

(Q5) what are chasmogamous flowers? Can cross pollination occurs in cleistogamous? flowers give reason for your answer 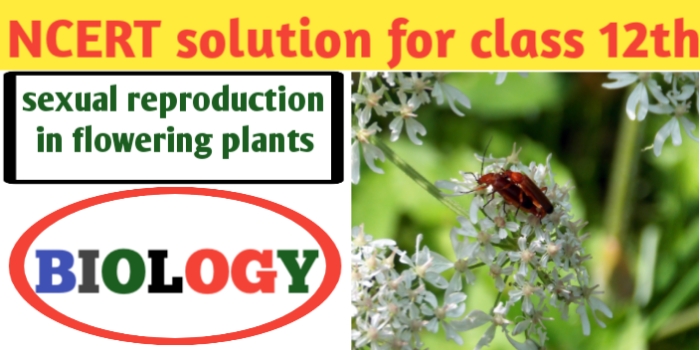 Ans. A) unisexuality:- the flowers are unisexual having one sex only .unisexual flowers are present on different plants that promotes the cross pollination

B) dichogamy:- in bisexual flowers anther and stigma mature at different times that condition suitable for the cross pollination

(Q8) what is bagging technique ?how is it useful in a plant breeding programme

Ans. In artificial hybridisation the pollen grains are removed from selective flower that is called in emasculation and emasculated flowers are covered with a bag of suitable size generally made of butter paper this step is called bagging. Bagging technique is done for prevention of contamination of unwanted pollen grains with its stigma. When stigma of bag flower attends receptivity and mature then mature selective pollen grains are collected from anther of male parents and are dusted on that stigma now the flowers are re bag and fruits are allowed to develop.

(Q10) why do you think the zygote is dormant for sometimes in fertilised ovule?

Ans. You know that zygote start formation of embryo only when certain amount of endosperm is formed ,this is an adaptation to provide and nutrition to the developing embryo by the endosperm so for the sometime zygote is remain dormant.

A) hypocotyl and epicotyl

Ans. Perisperm is the residual persistent nucellus and pericarp is covering of fruit wall

(Q12) why Apple is called as false fruit ?what parts of flower formed the fruit?

(Q13) what is meant by emasculation ? when and what does a plant breeder employ this technique?

Ans. Emasculation is the process of removal of pollen grains from anther of selective flowers of plant ,in crossing experiment it is necessary that only Desired pollen grains are used for pollination with stigma and stigma is protected from contamination with unwanted Pollen grains this is achieved by emasculation and bagging technique.

(Q14) if one can induce parthenocarpy through the application of growth substance ,which fruits you would select parthenocarpy and why?

Ans. You know that parthenocarpic fruits are seedless because seedless fruits in plant like Banana grapes and guava are in great demand the process is of practical value

Ans. Tapetum is the innermost layer of microsporangia and it provide nourishment to Young microspore Mother cell

(Q16) what is apomixis and what is its importance?

Ans. In apomixis process, seeds are formed without fertilization. it has been reported particulary in grasses it has advantages in Horticulture and Agriculture.