* introduction :- ncert solutions for class 12th biology chapter 3- CBSE-JAC exams and students might be busy in your preparation for coming 12th board Jharkhand academic Council exams.biologysir.com will provide many type of education material like fill in the blanks, true or false matching type questions ,multiple choice questions, very short questions answers type, short questions answer type and long questions type of 12th class Biology from each topic that help you in your preparation.and Matching question examples in biology for class 12th CBSE-JAC Exams

*In this post :- ncert solutions for class 12th biology chapter 3- CBSE-JAC exams and we provide you matching type questions with answer from the lesson 3 human reproduction 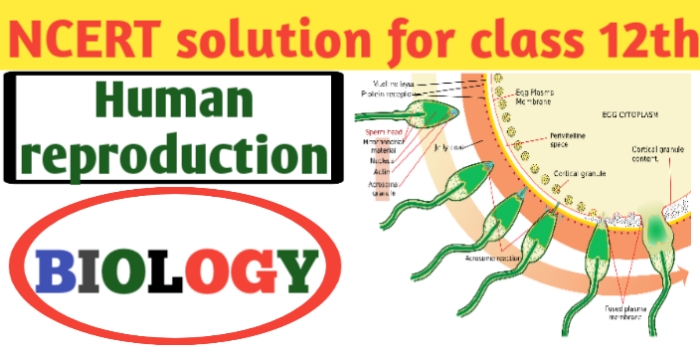 (Q2) write two major functions of each of testis and ovary

Ans. A) function of testis:-

B) function of ovary:-

(Q3) describe about a structure of seminiferous tubules

Ans. 1) seminiferous tubules of testis is lined by germinal epithelium having two types of cells :-germ cells and sertoli cells
2) germ cells which is known as spermatogonia formed haploid male gametes sperm by the process of spermatogenesis and intermediate stage is Primary spermatocytes secondary spermatocytes and spermatids.
3) sertoli cells:- it is pyramidal shape and provide nutrition to developing sperm

(Q4) what is spermatogenesis?

Ans. In testis spermatogenesis is process of formation of haploid motile microscopic male gamets that is called a spermatozoa from the diploid spermatogonia of the testis of male organism

(Q5) name the hormones involved in regulation of spermatogenesis

Ans. There is a following hormones which helps in spermatogenesis process

1) GnRH:- is secreted by hypothalamus its stimulate adenohypophysis of pituitary to Secrets gonadotropins hormone

2) FSH:- it is secreted by adenohypophysis of pituitary that stimulate sertoli cells to Secrets certain factor which help in spermatogenesis

3) ICSH- it is secreted by adenohypophysis of pituitary that stimulate interstitial cells to secret testosterone hormone it is stimulate spermatogenesis process.

4) testosterone:- it is produced from Leydig cells that control the development of secondary sexual characters in males

Ans. 1) spermiogenesis:- it is the process of transformation of non motile and rounded spermatids into motile flagellated spermatozoan that is sperm

2) spermiation:- it is the process of release of mature haploid sperm from sertoli cells in the lumen of seminiferous tubules

(Q7) what are major components of seminal Plasma

Ans. Oogenesis is process of formation of haploid female gametes that is called ova from the diploid oogonia of ovary of female organism

2) male accessory glands are flowing:-
a) seminal vesicles:- activate the sperm and stimulate vaginal contraction
b) prostate glands:- it active the sperm nutrition to a sperm and neutralize the acidity of urine in vagina
C) Cowpers glands:- it’s secrete mucus like secretion which lubricate the penis during copulation

(Q10) write the function of following:-

1) Corpus luteum:- it is formed from Graafian follicles after egg ovulation it secretes progesterone hormone please prepare the endometrium of uterus for implantation placentation and normal development of foetus and it’s maintains pregnancy

2) endometrium:- it is innermost highly vascular and glandular lining of internal uterus wall which undergoes a cyclic change during menstrual cycle and prepare itself for implantation of blastocyst and placentation

3) arosome:- acrosome present in head of sperm which secrets several enzyme like hyaluronidase corona penetrating enzyme and acrosin which function is to penetrate inside the ovum and dissolves wall of zona pellucida and Corona radiata

4) sperm tails: It is form of axoneme which provide lacing movement of sperm

5) Fimbriae:- it is finger like process of fallopian tubes which increase the chance of trapping of ovum which released from the ovary

Ans. A) menstrual cycle is a series of monthly cyclic change occurring in the ovary of female genital tract which prepare the female for fertilization implantation and pregnancy

B) menstrual cycle is regulated by following hormones

1) FSH-RF:- it is secreted from hypothalamus which stimulate adenohypophysis of pituitary to Secrets FSH hormone

2) FSH:- it main function is to change of one primary follicles into graffian follicles and stimulate the secretion of oestrogen from it

3) estrogens:-it regulate the growth and development of secondary sexual character of female body and stimulate the secretion of LH from adenohypothesis of pituitary

4) LH:- it is secreated from adenohypophysis of pituitary stimulate ovulation transformation of empty graffian follicles into Corpus luteum and secretion of progesterone from Corpus luteum

5) progesterone:- it is secreted from yellow body Corpus luteum important for fertilization implantation placentation and embryo development in endometrium of uterus

(Q13) what is parturition ?which hormones involved in induction of parturition

Ans. 1)parturition:- it is the process of release of fully formed young ones from the Mother’s uterus after the complete of gestation period

2) the hormones which helps in parturition

A) oxytocin:- it is release from posterior pituitary glands and stimulates forceful contraction of myometrium of uterus and induces labour pain

B) Relaxine:- it is released from placenta which widen the pelvis for easy childbirth

(Q14) in our society the womens are often blame for giving birth to doughters. can you explain why this is not correct

Ans. It is not correct to blame the womens for giving birth to doughters because female is homogametic sex and produce only one types of chromosomes and eggs having 22 Autosome and one X chromosome. On other hand mail has heterogametic sex which produce two types of a sperm one with X chromosome and second with Y chromosome. The sex of baby depends upon the type of a sperm X or Y fusing with the x chromosome of female so sex of baby is determined by father and no by mother.

(Q15) how many eggs are released by human ovary in a month ?how many eggs do you think would have been released if a mother gave birth to identical twins? would you answer change if the twins born where fraternal

Ans. 1) human female ovary produce only one eggs in one month during menstrual cycle

3) the fraternal twins are dizygotic and are produced from two different zygote which is possible only if two eggs are released from the ovary in a month, which are found in a rare case

Ans. The ovaries of female dog must have released six eggs which each of get fertilize and so 6 zygote are formed and each of which develop into embryo and give birth to young 6 puppy.