Is syphilis an STD ? Cause, transmission symptoms and treatment.

Hi guys in this article you know about is syphilis an STD ? Cause of syphilis disease their mode of transmission different symptoms and treatment.

Syphilis can also be transmitted from a infected mother to her child during pregnancy and gestation period. Syphilis sores known as chancres occur mainly on the genitals, anus, and rectum, but also on the lips,tongue and mouth. Genital sores caused by syphilis increase the risk of sexual transmission of HIV AIDS and Hepatitis B disease. 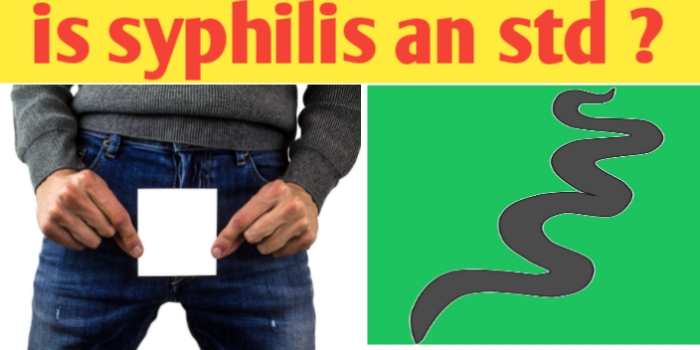 Is syphilis an STD ? Cause, transmission symptoms and treatment

Is syphilis an STD ?

There are many sexually transmitted disease like syphilis, chlamydiosis, gonorrhoea, AIDS, hepatis B ,genital herpes, genital warts, vaginal yeast infection etc which are spread worldwide. Is syphilis an STD ? Cause, transmission symptoms and treatmen

Most of sexually transmitted disease are often called as silent infection because in the early stage they may not produce symptoms especially in women. and syphilis is one of them. by the time symptoms appear it is often too late to prevent infection to sexual patterns . so study std are also known as International disease.

Syphilis is caused by

Syphilis is caused by Treponema Palladium bacteria belongs to the Phylum of spirochaeta bacterium with various sub species that causes the disease syphilis. Treponema Palladium transmitted among the human beings and one of vunerable and infectious disease. T. Palladium is helical coiled bacterial microorganism usually 6 to 15 micro metre long and 0.1 to 0.2 micro metre wide. Palladium have lake of metabolic Pathways like tricarboxylic acid cycle and oxidative phosphorylation.

There are three subspecies of T. pallidum are known as following

All three subspecies causing yaws, bejel, and syphilis are morphologically and serologically indistinguishable. These bacteria were originally classified as members of separate species, but DNA hybridization analysis indicates all are members of the same species. Treponema carateum, the cause of pinta, remains a separate species because no isolate is available for DNA analysis. T. Pallidum pallidum is the most invasive pathogenic subspecies.

but syphilis can also be spread congenitally during pregnancy in women in utero or less commonly during passage through the birth canal. And some cases of acquisition through blood products and organ donation have also been reported.

The bacteria enter your body through minor cuts or abrasions in your skin or mucous membranes. Syphilis is contagious during its primary and secondary stages, and sometimes in the early latent period.

Less commonly, syphilis may spread through direct unprotected close contact with an active lesion (such as during kissing) or through infected mothers to their babies during pregnancy or childbirth (congenital syphilis).

Syphilis can’t be spread by using the same toilet, bathtub, clothing or eating utensils, or from doorknobs, swimming pools or hot tubs.

Once cured, syphilis doesn’t recur on its own. However, you can become reinfected if you have contact with someone’s syphilis sore.

And syphilis in women also transmitted by infected person to healthy person. And it can be also transmitted to foetus from infected mother through Placenta during the pregnancy and gestation period known as conventional syphilis.

Today syphilis is spreading worldwide. The global burden all over the world of syphilis infection is high with an estimated 10.7 million incident cases occurring annually. Syphilis rates are rising among men who have sex with men that is known as MSM that catches is found in more in develop country like European country and USA. There is large case of syphilis reported in European cities due to act of MSM. And also Asian and African country are not untouchable from act of MSM.

1) primary stage :- in this stage treponema pallidum bacteria effects external genitalia of men and women in 90% cases and it may be extragenital and appear on lips ,tongue and fingers about 10%.

Primary stage is of about 1 to 6 weeks of incubation period in which a hard, dry and bacteria field sore are develop over the genital and extra genital organs known as chancre.

2) secondary stage :- it is of about 3 to 8 weeks and is characterized by multiple lessons in mucous membrane of the lips, mouth and genital. other symptoms include white patches on tongue, cheeks and gums low grade of fever and loss of appetite.

3) tertiary stage is characterized by spread to bacteria to internal organs like heart, brain and may lead to Paralysis and mental disorder . large-sized sore called as gummas may appear on the skin. bacteria may cross the Placenta of infected mother to the new born during birth.

Syphilis symptoms include formation of syphilis sores known as chancres occur mainly on the genitals, anus, and rectum, but also on the lips,tongue and mouth. Genital sores caused by syphilis increase the risk of sexual transmission of HIV and hepatis B

Research advancements and the latest in
Syphilis is a bacterial infection usually spread by sexual contact. Symptoms of syphilis disease starts as a painless sore — typically on your genitals, rectum or mouth and extra genital organ like mouth lips and tongue both male and female. Syphilis spreads from person to person via skin or mucous membrane contact with these sores.

After the initial infection of the T. Pallidum the syphilis bacteria can remain inactive and dormant in your body for decades before becoming active again.

Syphilis develops in stages, and symptoms vary with each stage. But the stages may overlap, and symptoms don’t always occur in the same order. You may be infected with syphilis and not notice any symptoms for years.

The first sign of syphilis is a small sore, called a chancre . The sore appears at the spot where the bacteria entered your body. While most people infected with syphilis develop only one chancre, some people develop several of them.

The chancre usually develops about three weeks after exposure. Many people who have syphilis don’t notice the chancre because it’s usually painless, and it may be hidden within the vagina or rectum and extra genital organ like mouth lips and tongue. The chancre will heal on its own within three to six weeks.

Secondary syphilis within a few weeks of the original chancre healing, you may experience a rash that begins and develop on your trunk but eventually covers your entire body and even the palms of your hands and the soles of your feet. This rash is usually not itching in nature and may be accompanied by wartlike sores in your mouth or genital area.

Some people men and women also experience hair loss, muscle aches, a fever, a sore throat and swollen lymph nodes. These signs and symptoms may disappear within a few weeks or repeatedly come and go for as long as a year.

If you aren not treated for syphilis disease the disease moves from the secondary stage to the hidden stage known as latent stage. when you have no symptoms. The latent stage can last for years. Signs and symptoms may never return, or the disease may progress to the third stage that is known as tertiary stage.

About 15% to 30% of people infected with syphilis who do not get treatment will develop complications known as tertiary syphilis. In the later stage, the disease may damage your vital organ like brain, nerves, eyes, heart, blood vessels, liver, bones and joints. These problems may occur many years after the original and untreated infection.

Babies born to women who have syphilis can become infected through the placenta or during pregnancy and birth. Most newborns infant with congenital syphilis have no symptoms, although some experience a rash on the palms of their hands and the soles of their feet. Later signs and symptoms may include deafness, teeth deformities and saddle nose where the bridge of the nose collapses.

However, babies born with syphilis can also be born too early, be born dead stillborn or die after birth.

Signs and symptoms of syphilis

2) Cardiovascular problems like these may include bulging known as aneurysm and inflammation of the aorta and your body’s major artery and of other blood vessels. Syphilis may also damage heart valves.

3) syphilis disease may causes HIV infection
Adults with sexually transmitted syphilis or other genital ulcers have an estimated two to fivefold increased risk of contracting HIV. A syphilis sore can bleed easily, providing an easy way for HIV to enter your bloodstream during sexual activity.

4) congenital syphilis is developed during pregnancy and childbirth complications
If you’re pregnant, you may pass syphilis to your unborn baby. Congenital syphilis greatly increases the risk of miscarriage, stillbirth or your newborn’s death within a few days after birth.

Once syphilis disease cured and it syphilis doesn’t recur on its own. However, you can become reinfected if you have contact with someone’s syphilis sore.

There is no vaccine for syphilis. To help prevent the spread of syphilis by following these suggestions as

1) Abstain or be monogamous. The only certain way to avoid syphilis is to not have abstain from sex. The next-best option is to have mutually monogamous sex in which both people have sex only with each other and neither partner is infected.

2) Use a latex condom. Condoms can reduce your risk of contracting syphilis, but only if the condom covers the syphilis sores.

3) Avoid to use recreational drugs and misuse of alcohol or other drugs can inhibit your judgment and lead to unsafe sexual practices.
Partner notification and preventive treatment
If tests show that you have syphilis, your sex partners including your current partners and any other partners you’ve had over the last three months to one year need to be informed so that they can get tested. If they’re infected, they can then be treated.

Early syphilis can be cured, sometimes with a single shot of injection of antibiotic. The recommended at the antibiotic are tetracycline and penicillin are most effective. Without treatment, syphilis can severely damage your heart, brain or other organs, and can be life-threatening. Syphilis can also be passed from mothers to unborn children.

Without treatment, syphilis can lead to damage throughout your body. Syphilis also increases the risk of HIV infection and, for women, can cause problems during pregnancy. Treatment can help prevent future damage but can’t repair or reverse damage that’s already occurred.

Small bumps or tumors
Called gummas, these bumps can develop on your skin, bones, liver or any other organ in the late stage of syphilis. Gummas usually disappear after treatment with antibiotics.