* introduction :- ncert solutions for class 12 biology chapter 1- CBSE-JAC exams and students might be busy in your preparation for coming 12th board Jharkhand academic Council exams.biologysir.com will provide many type of education material like fill in the blanks, true or false matching type questions ,multiple choice questions, very short questions answers type, short questions answer type and long questions type of 12th class Biology from each topic that help you in your preparation.reproduction in organism

*In this post :- ncert solutions for class12 biology chapter 1- CBSE-JAC exams and we provide you matching type questions with answer from the lesson 1 reproduction in organism

(Q1) why is reproduction essential for organisms?

Ans. Reproduction is essential for continuity of life of any species in a given time . its is only methods by which the thread of life is maintained. it enables the species to live generation after generation.

(Q2) which is better mode of reproduction sexual or Asexual why ?

(Q5) why is the offspring formed by Asexual Reproduction referred to as clone?

Ans. In asexual reproduction clones are produced that’s are identical and exact copies of their parents,and clones are genetically physiological and morphological similar to their parents

(Q6) offspring formed due to sexual reproduction have better chance of survival why?

Ans. 1) variation are produced by sexual reproduction in offspring that leads to evolutionary significance

(Q7) what is vegetative propagation ?give two suitable example

Ans. a) juvenile phase:- all organisms have to reach certain stage of growth and maturity in their life before they can reproduce .this period of growth is known as juvenile phase or vegetative phase

c) senescent phase:- after the end of reproductive phase all the parameters of our body undergoes slow metabolism and ultimately leads to death

(Q9) higher organism had resorted to sexual reproduction inspite of its complexity why?

Ans. Sexual reproduction is present in most of the organisms and those organism which depend upon asexual reproduction for their multiplication like fungi and algae Swift on the sexual mode of reproduction due to adverse condition .it is due to appear from a asexual spors under unfavourable conditions change into gametes and leads to formation of zygote . time of origin of sex benefit accidentally by fusion of gametes that is called hunger theory of sex 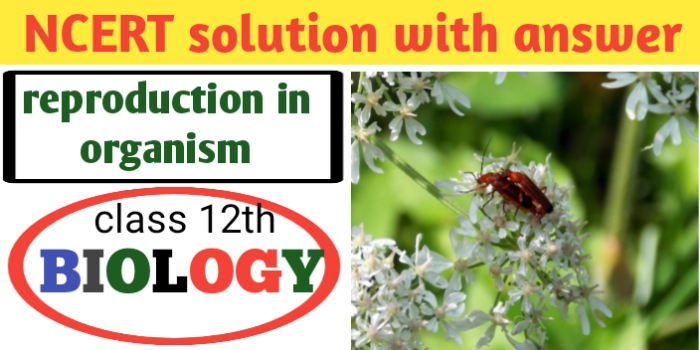 (Q10) explain why meiosis and gametogenesis are always interlinked

Ans. Gametogenesis is the process of formation of two types of gametes male and female gamete that is a sperm and ova and we know that gametes are haploid cells. But majority of body are in diploid stage . so there is meiosis cell division by which diploid cells change into haploid cells so meiosis and gametogenesis are always interlinked to each other

Ans. The fertilization in which fusions of gametes occurs in external medium like water outside the body of female organism. it is found in majority of fishes algae as well as frog.

Organised fish undergoes external fertilization should release large number of gametes and occasionally some gametes fuse to form zygote and large number of offspring are produced but such of springs are highly vulnerable to Predator and threating their survival up to adulthood.

(Q13) differentiate between zoospore and zygote

(Q14) differentiate between gametogenesis and embryogenesis

Ans. In flowering plants zygote is formed inside the ovules. after fertilization process sepal petals and stamens of the flower fall off and destroy. Zygote forms the embryo and ovule having embryo formed the seeds, ovary is develop into fruits and ovary wall develop into pericarp of fruit and ovule is develop into seed

(Q16) what is a bisexual flower ?collect five bisexual flowers from your neighbourhood and with the help of your teacher find out their common and scientific name

Ans. A flower which bears both male and female sex organ is called bisexual flower

(Q17) examine a few flowers of any cucurbit plant and try to identify the staminate and pistillate flower . do you know any other plant that bears unisexual flower?

Male flowers bear 5 stamen in which carpel is absent and female flowers bears 3 fuse carpels inferior to ovary that is unilocular and parietal placentation .in that cash androecium is absent

(Q18) why offspring of oviparous animals are at greater risk

Ans. In oviparous animals the eggs are laid outside of body and whole of embryonic period and development is exposed to harmful environmental and biological factor and life is threating to predators so chance of death are in such cases