Human beings like most of mammals are unisexual or dioecious having separate sex male and female. Each human being has only either male or female gonad, reproductive ducts and accessory genital structure.

Physiology of male reproductive system consist of gametogenesis which involves the formation of haploid sex cells or gamete called sperm from primary germ cell spermatogonia in testes. Gametogenesis in the case of male is known as spermatogenesis.

Next physiology is insemination or ejaculation which involves release of seminal fluid of male in the vagina of female at the end of copulatory act. After this it involve fertilization ,cleavage, implantation, placentation, gastrulation, organogenesis and finally parturition which involves expelling of fully formed baby from the mother uterus after the completion of gestation period. 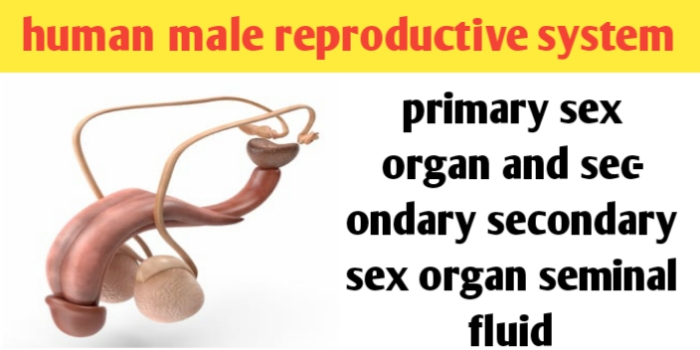 Male reproductive system which is concerned with a sperm formation and it is located in pelvis region. 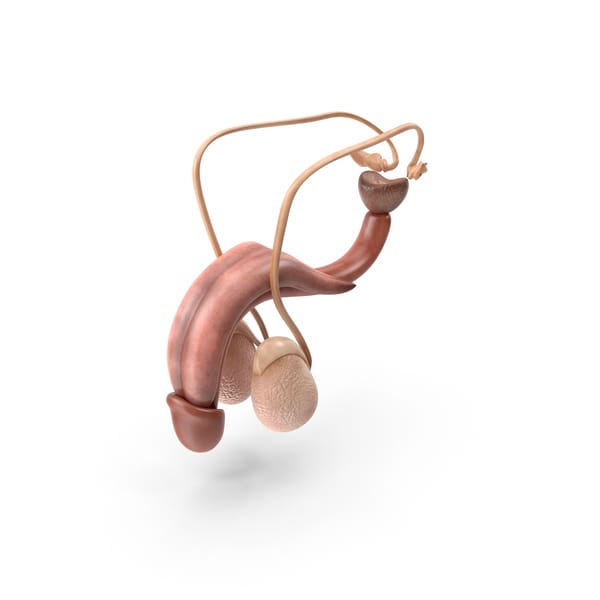 Testis are present in thin walled skin pouches called scrotal sac or scrotum so they are extra abdominal, hanging from lower abdominal wall between the legs. Scrotal sac is filled with tissue fluid known as hydrocele, testis is held in position in scrotum by a small thick white fibrous gubernaculum and spermatic cord.

The cavity of scrotal sac is known as vaginal coelom and it is connected to abdominal cavity from inguinal canal. And scrotal sac act as thermoregulator and keep the testicular temperature to 2 to 2.5 degree Celsius lower than body temperature for normal spermatogenesis, as high abdominal temperature kills the spermatogenic tissues. Thermoregulation is maintained by a spermatic cord and a smooth muscles of scrotum.

Is testis is externally covered by a white fibrous capsule known as tunica albuginea which is produced inside the testis as fibrous Septa. Which septa is divided the testis into number of testicular lobules which is about 250 in number.

Each testicular lobules as 1 to 3 convoluted seminiferous tubules also called crypts, which one inner side become straight known as tubuli recti and open into a network of tubules called rete testis.

What is seminiferous tubules

Each testis is formed of about 1000 seminiferous tubules. Tunica albuginea is externally covered by a peritoneal layer of flat cells called tunica vaginalis. Each seminiferous tubules is lined by a germinal epithelium formed of two types of cells- germ or spermatogenic cells and sertoli or nurse cells.

Seminiferous tubules is externally covered by an outer tunic of fibrous connective tissues and inner basal lamina. Germ cells are cuboidal and form bulk of epithelium. These undergoes spermatogenesis form haploid and motile male gamete called a spermatozoa or sperm.

Sertoli cells or nurse cells are a few pyramidal shaped cells which provide nutrition to developing a sperm.

Scattered in connective tissues and lying between seminiferous tubules there are group of polyhedral endocrine cells called interstitial cells or leydig’s cells. Leading cells secrets steroid male sex hormone known as androgen or testosterone which control the development of secondary sexual character and organ in male and help in spermatogenesis process.

◆ Epididymis: on the posterolateral side of each testis there is an enlogated and flattened structure called epididymis. It is formed of a long about 6 metre long coiled tube and it is different into 3 parts head, body and tail.

Head of epididymis is also known as caput epididymis or globus major. It is a swelling part present on cranial side of the testes. it is received the sperm from rete testes by 10 to 12 find ciliated ductules called Vasa efferentia.

Body of epididymis is known as Corpus epididymis or globus normal. It lies on lateral side of testis and stores the sperm temporarily.

Tail of epididymis is also known as Cauda epididymis or globus minor.

◆ Vas diferentia ( seminal ducts) : Vas deferens is long about 30 cm, narrow muscular and tubular structure which start from the tail of epididymis, ascends, passes through in inguinal Canal, passes over the urinary bladder in the abdomen and finally dilated to form ampulla which join the duct of seminal vesicle to form is equilatory duct which is 2 cm long. Which passes through prostate gland and join the urethra.

◆ Urethra:- it arises from the urinary bladder and join the ejaculatory duct to form urinogenital canal as it carries urine sperm and secretion of seminal vesicles, prostate and Cowper’s gland.

◆ Penis:- it is a cylindrical, erectile and copulatory organ. it forms the external genitalia of male reproductive system. it is supported by 3 erectile tissues- two posterior yellow fibrous ligamentous known as corpora cavernosa and one interior highly vascular and spongy known as Corpus spongiosum which surround the urinogenital canal.

Tip of penis is highly sensitive and is known as glans penis it is covered by retractile skin fold called foreskin or prepuce.

Secondary reproductive glands of male consists of one pair of seminal vesicle, one large prostate glands and one pair of opposite Cowper’s gland.

◆ Seminal Vesicles:- these are one pair of elongated about 5cm muscular and sacculated glands present in the pelvis between the bladder and rectum. Their ducts join the Vasa deferentia.

◆ Prostate gland:- it is one large, chesnut-shaped, spongy and lobulated gland which surrounds the proximal part of urethra. It pour its alkaline secretion into urethra by 20 to 30 openings. It contents some lipids a small amount of citric acid bicarbonate ion and a few enzyme.

◆ Cowper’s glands:- it is also known as bulboureteral gland. These are one pair white, pea-seed sized tubuloalveolar gland present at the base of penis.

Major function of male reproductive system is spermatogenesis that is formation of sperm by the seminiferous tubules and secretion of male sex hormone testosterone from leydig cells and transfer of a sperm into vagina of female during copulation.

Function of epididymis is, it involved in a storage for 18 to 24 hour, nutrition and physiological maturation of the sperm. it also shows peristaltic and segmenting contraction to move the sperm.

Function of Vasa deferentia is conduction of sperm by peristalsis of its highly muscular coat.

And function of urethra is conduction of sperms secretion of accessory reproductive glands and urine.

Function of penis, it help in copulation, erection of penis is due to rush of arterial blood about 10 times more into the sinuses of Corpus spongiosum added by contraction of erector penis muscles.

Secretion of seminal vesicles formed about 60% of semen and is mainly form of citrate, fructose several proteins and prostaglandans which activate the spermatozoa and stimulate vaginal contraction help in fusion of gametes.

Prostate gland secretion forms about 30% part of semen ,activate the sperm, provide nutrition to sperm and neutralizes the acidity of urine which may kill the sperm.

Cowper’s gland secretion of mucus like substance that lubricates the penis for frictionless movement of penis during copulation.

What is definition of seminal fluid ?

The growth and maintenance and functioning of secondary sex organ like epididymis Vasa deferentia accessory glands and penis are under the role of testosterone hormone secreted by Leydig’s cells of testis.

● Hypospadias:- it mean literally “below the fleshy spike.” hypospadias is characterized by a condition in which the external urinary meatus that is top opening opens anywhere below the tip of the penis rather than at the tip.

◆ Hydrocele – it is more common human male reproductive system disease which is characterized by a fluid filled sac partially surrounding the testis. Manifests itself as a swelling on the side of the scrotum wall. It may cause discomfort. Can be surgically corrected by the doctor. Urologist are expert in their surgery of hydrocele.

◆ Varicocele – dilated and twisted veins of the testis, look like sort of “hemorrhoids” in the scrotum, it manifests itself as a swelling on the side of the scrotum wall which may look and feel like a “bag of worms.” it may be surgically corrected by Urologist doctor if causing discomfort. This condition varicocele may also cause reduced sperm count in male and male sterility due to sluggish blood flow elevating testicular temperature.

◆ Cryptorchidism – it literally known as “hidden testicle.” A condition of lack of descent of one or both testes into the scrotum wall or scrotal sac. If it is not corrected early by Urologist doctor by surgery, before puberty, can lead to sterility and increased risk of testicular cancer.

◆ Benign prostatic hypertrophy (BPH) – it is characterized by swelling of the prostate gland which surrounds the base of the male bladder and urethra causing difficulty in urinating, dribbling, and nocturia. BPH becomes more common as men age.

◆ Transurethral resection of the prostate (TURP) – it is characterized by the surgical removal and cure for BPH. An instrument inserted through the penile urethra is used to partially cut away the prostate to relieve obstruction of the urinary tract.

◆ Prostate Specific Antigen (PSA) – it is characterized by, it is a marker protein for prostate cell secretions which can be detected with a lab test in laboratory. A rising PSA may be an early sign of prostate cancer, although there may be other causes including false positive tests.

◆ Gynaecosmastia:- excessive development of mammary gland in male is term Gynaecosmastia. it is developed in male when oestrogen secretion is more than those of androgens. it may occur in newly born and at the property due to temporary increase in circulating estrogens. Gynaecosmastia may also occur in later life due to deficiency of testosterone hormone.