What is the full form of DNA and RNA ?hi guys we know that DNA is genetic material  in higher organism responsible for transfer of genetical character from parents to offspring and DNA is nucleic acid found in nucleus of cell. 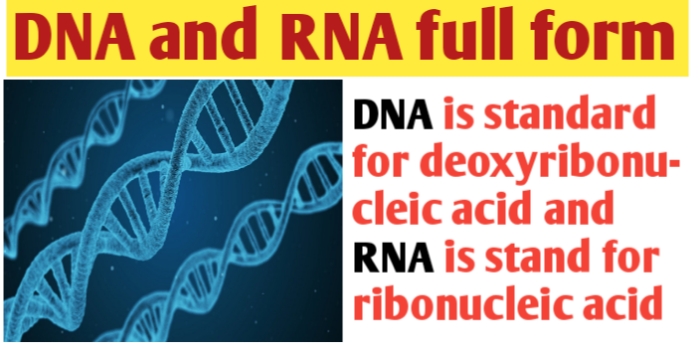 What is the full form of DNA and RNA ?

What is full form of DNA and RNA

Chromosomes are made of nucleoprotein which constitute basic protein and nucleic acid .There is two kinds of nucleic acid recognised DNA and RNA.

Year 1869 receive good attention towards DNA Discovery. The swiss chemist Friedrich Meischer in 1869 first discovered nucleic acid reported from nuclei of pus cells they name it nuclein. DNA is acidic substance present in nucleus was identified by Friedrich Meischer and he called them as nuclein.

What is the full form of DNA and RNA ?

And discovery of RNA begin with the discovery of nucleic acid by Friedrich Meischer in 1869 who called the material nuclein present in nucleus. DNA is storehouse of genetic material and it transmit information to RNA.

James Watson and Francis Crick in 1953 proposed the helical structure of DNA for which they were awarded Nobel Prize. The two strands of DNA are helicaly coiled in such a fashion that base molecules of two strands are linked together by weak hydrogen bond to constitute base pairs.

The two right handed helix are coiled in an interlocked form about the same axis and each term of double helix content ten paired nucleotides. Some student want to know who discovered DNA structure? that answer is James Watson and Francis Crick discovered the DNA structure.